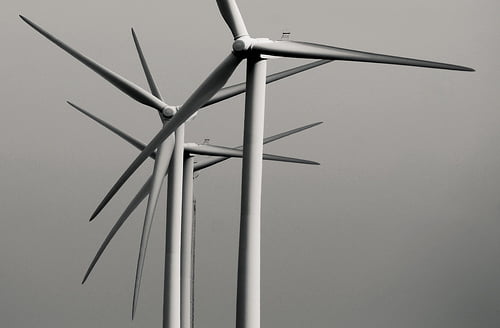 Figures released by the Department of Energy and Climate Change (DECC) earlier this week showed the extent to which a cross-section of the British public supported renewables.

The encouraging survey, which was conducted last year in March, June, September and December and weighted to be representative of the UK adult population, showed that 79% of the UK was behind the use of clean energy in providing electricity, fuel and heat. In contrast, just 4% opposed its use.

But what becomes clear when looking at this latest wave is that policy remains the biggest stumbling block of all for this important, innovative industry. Public support for renewables is almost overwhelming; yet a very vocal minority, blessed with a powerful platform, is doing its best to scupper our chances of achieving sustainable economic growth and getting energy security for the long-term.

We wrote last week how George Osborne’s championing of the HS2 high-speed rail line proved his ideological objection to renewable energy. The chancellor – the man charged with dealing out government spending in the UK – is seemingly fixated with a ‘dash for gas’, which might be profitable for the UK in the near-term, but is reckless, unsustainable and – if the government’s own climate adviser, the Committee on Climate Change, is to believed – illegal. 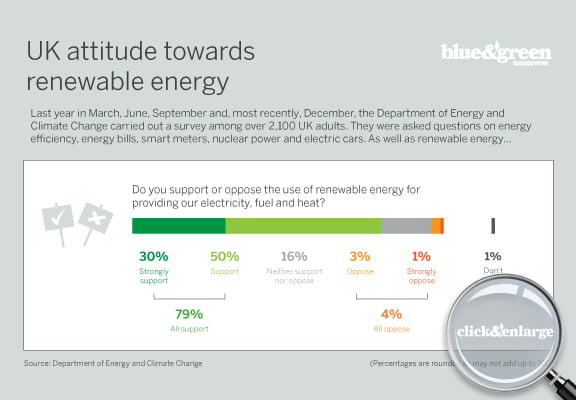 Do you support or oppose renewable energy? (Click to enlarge).

Former US vice-president Al Gore – a political figure as environmentally switched on as anyone in history – recently called Osborne “seriously misinformed” for opposing the correlation between a healthy economy and a healthy environment.

Only this week, however, David Cameron made a speech – or rather, “introductory remarks” – at the launch of DECC’s energy efficiency mission.

The prime minister said, “Far from being a drag on growth, making our energy sources more sustainable, our energy consumption more efficient, and our economy more resilient to energy price shocks – those things are a vital part of the growth and wealth that we need.”

Many commentators were cynical about Cameron’s speech – specifically DECC’s decision not to promote it to the media – but the short address contained some of the most promising green comments he’s made since the coalition entered government. For the supposed “greenest government ever”, this is long overdue.

A YouGov poll from October gave renewables an “unequivocal vote of confidence”, as Britons handed support to wind and solar, and opposition to fossil fuels. Meanwhile, 62% of UK respondents in an EU-wide survey last month said that renewables should be given priority in the energy mix over the next three decades.

Only yesterday, The Independent reported that the prime minister would be making a keynote speech on the environment “in the next few weeks”. It’s imperative that he listens to the vast majority of the UK public – his UK public – which wants renewable energy to be the backbone of the economy, creating jobs, wealth and sustainable growth – not an obligatory side-project thrown in simply to meet carbon targets.