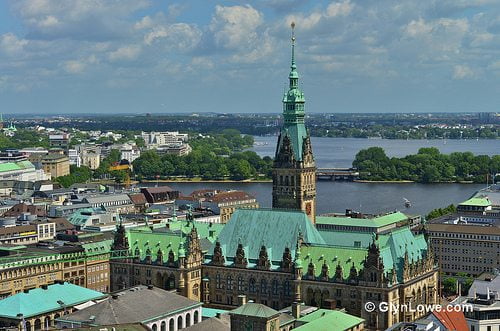 Hamburg is the second largest city in Germany – with a population of 1.8 million – and it is growing.

It is one of Europe’s most affluent metropolises and is often recognised as one of the more desirable places to live in rankings, having been rated 17th globally by Mercer in 2012 and eighth by Numbeo.

It also held the title of the European Green Capital in 2011, and it would be little surprise if Hamburg maintains such admiration, thanks largely to its pioneering environmental efforts.

Already the urban centre is well connected, with almost all residents living within 300 metres of public transport. However, the city has also planned a green network that will cover 40% of the city, connecting parks, playgrounds and gardens through green pathways.

These will mean that in 15 to 20 years, it will be possible to traverse Hamburg entirely by bike or on foot through a lush, green environment. Even commuters less human will benefit, with wild animals able to use the network to safely cross the city.

There is more to these plans than aesthetics and commuter safety, however. Hamburg sits on the river Elbe, with its port – one of the busiest in Europe – some 110km from the mouth opening into the North Sea. It is a city at risk from the rising sea levels and increasingly frequent storm surges that climate change is likely to bring.

It is hoped that its green spaces will also act as flood defences, soaking up water, while contributing to fight against climate change by soaking up carbon dioxide emissions also.

The city is also home to Europe’s largest inner-city regeneration project. When completed in 2025, the 157 hectares, $14 billion (£8 billion) HafenCity (Harbour City) project will house a port, a university and a range of residential and commercial developments, connected by thoroughly planned transport network with sustainability at its core.

Such regeneration is in fact typical of Hamburg’s approach to expansion. Despite a rising population, its city planners refuse to look outwards, opting instead to renovate wasted land in the centre.

With such a considered, sustainable approach applied to most things the city does, it would seem that the future looks bright for all Hamburgers. Except perhaps for fans of Hamburger SV, the city’s biggest football team, who currently sit third from bottom in Germany’s top league.