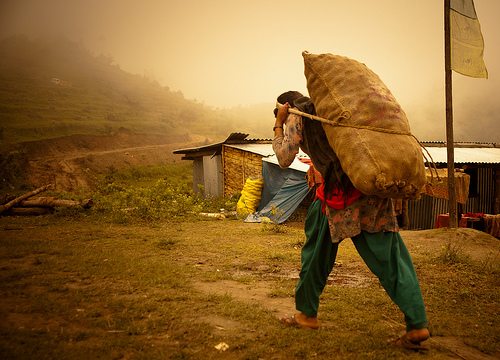 The approach to a holiday differs widely, but generally there are two extremes, with most people dotted in between. A holiday is either a time to go away, be pampered, never leave the pool side and think solely of oneself, or it is an opportunity to get down and dirty with a new place, discovering sights and cultures previously unknown.

Sustainable tourism is not about suggesting that all comforts are eschewed in favour of a tent and Zen, but about ensuring that travel provides what the tourist wants, as well as the local community and environment, at the time of the holiday and later down the line.

Why does it matter? Can’t we just relax about this whole sustainability thing for two weeks a year? Between 2010-2011 the number of tourists travelling abroad increased 4%, reaching 1 billion in 2013. It is estimated that this will have doubled by 2020.

With 2 billion people travelling to international shores every year, how can it be ensured that the effect is one of positivity? Or if you want an even more dramatic stat, consider that it has grown 4,000% since 25 million went travelling in the 1950s.

This is a huge number of people having a huge impact upon the world, and this growing demand for holidays correlates alarmingly well with a decrease in resources with which to do so.

Sustainable tourism as an industry for change

Ban Ki-moon, secretary-general of the United Nations, spoke at September 2012’s World Tourism Day, where the focus was on sustainable tourism. He said tourism was a necessary and important industry to consider if the UN’s development goals are to be achieved, if only due to its size as an economic sector, and its relationship with energy (tourism is responsible for an estimated 5% of the world’s energy consumption).

Representing 9% of the global GDP and responsible for one in 12 jobs, and given that in 30% of developing countries tourism is the prime export, the industry has the potential to make a huge difference.

When on holiday, we all behave a little differently, and are less rigid – whether that is the diet, bedtime, or letting the tap run. According to sustainabletourism.net, on average a Canadian household uses 3,261 litres of water per day, whereas a single resident in a luxury hotel uses around 1,800. Compare this to a village of around 700 in a developing country that uses only 500 per month.

Just one long haul flight emits the same amount of carbon dioxide into the atmosphere as the average UK motorist does on an annual basis. But this isn’t a post about turning off the tap or reusing towels, as numerous hotels will tell you to do that via little signs in the bathroom. This is about what I think is the most important part of sustainability: the people.

The power of people

When researching the concept of sustainable travel, I saw it referred to as ‘destination stewardship’, a phrase and definition that particularly resonated. A responsibility to care and consider the communities you visit, not in any sense of ownership, but due to them being equal human beings. Community development and cultural heritage should be protected and enhanced, and this can only be done with a good understanding of local needs.

A recent study by Churchill Insurance claims that an average family of four spends £4,792 on a fortnight-long holiday. An eye watering amount as it is, but even more so for many tourist vendors.

Think how valuable this could be if spent in ways that will benefit a community – without diminishing any value for the tourist. It is important to distribute value and spending amongst the region or community in order to generate value for the area.

That £4,792 can be shared across a small economy – buying ice-cream from one vendor, staying in the local hotel, using a different transport company every day, visiting different places for dinner – or can be lost in the bottom line profits of a multinational. It is not necessarily about how much someone spends, but where it is spent, considering the consequences and implications of one’s actions.

In June 2012, the UN Economic Commision for Africa estimated that less than 22% of revenue spent actually lands with the local African communities: a worrying statistic. So what can be done to share out the benefits of tourism?

The Vietnamese tourist board has been very hands-on in encouraging integration of the local community in their tourism plans, aiming to engage locals through homestay accommodation, employing them as tour guides, and encouraging authentic travel.

Meanwhile, Destination Melbourne has made it its role to reduce the environmental impact of tourism, and in particular has integrated energy efficiency into its plans and formed benchmarks and committees to regulate this.

As well as the destination ensuring that sustainability can be achieved, it is the role of the tourist to think about the communities and places they are visiting. The answer to this? People.

Be interested in where you are visiting, why it is unique, and the people that make the place – and make sure that everything you do enhances the positive aspects of your trip and your hosts. Tourism For Tomorrow centres its activity around three central tenets: people, planet and profit. It is finding a balance between these that will be the answer to true sustainability, and happy holidays.