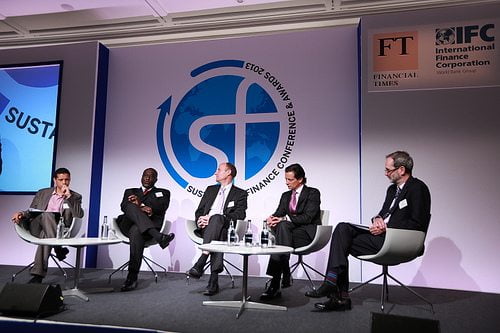 The impressive InterContinental Hotel on Park Lane was the setting for the eighth annual FT/IFC Sustainable Finance Conference and Awards on Thursday, June 13. Hosted by the Financial Times (FT) and the International Finance Corporation (IFC), it serves as an opportunity for the global financial services industry to discuss sustainability and doing something useful with money.

Split up into a daytime conference and an evening awards dinner, the 2013 event kicked off with an introductory speech from former FT business editor John Willman, who now acts as an editorial consultant at the publication.

Writing in the programme notes, FT editor Lionel Barber and IFC CEO Jin-Yong Cai spoke about the “persistent economic and financial uncertainty” and “unparalleled resource constraints” that were putting pressure on social and environmental systems. They said the conference hoped to tackle some of these issues.

The first panel session of the day, about bridging the infrastructure gap, aimed to look at the disconnect in infrastructure investment between the public and private sectors.

James Cameron, non-executive chairman of Climate Change Capital, explained how all our current infrastructure has to be rethought – but that he was optimistic we’d make the necessary changes. He said the potential consequences of climate change, which changes weather patterns, increases the frequency of natural disasters and brings about things like droughts and floods, will impact infrastructure heavily.

Michael Eckhart, managing director and global head of environmental finance at Citigroup, described the public and private sectors as mountains. But, he added, “It’s much easier to build a bridge than to move mountains.”

Eckhart went on to say that the short-termism within infrastructure investment was down to the political system. Whereas we want stability, the nature of our political system is continuous change. And we elect politicians to bring about change.

A delegate in the audience posed an interesting question to the panel, which also included Danny Truell of the Wellcome Trust and Nick Rouse of Frontier Markets Fund Managers. The attendee said, “If we rely on governments, we’re doomed”, and asked how big institutions can help community schemes happen more quickly.

Cameron replied, saying there was big scope for many community initiatives to work together to build confidence and the capacity to get into the supply chain. We also need a bit of a shake-up on how fossil fuel assets are valued by the markets, and you don’t need governments to do this if you’re in financial services.

He added that the difference between how coal and solar are priced currently “could not be explained rationally”.

The next segment was the first of five interviews with nominees in the achievement in inclusive business category in that evening’s awards ceremony. Carlos Enrique Cavelier Lozano, president of Alqueria Dairy in Colombia, spoke about how his business is helping small-scale co-operatives in the country to sell and improve the production of milk by providing them with credit, technical assistance and guarantees of purchase.

This was followed by an interview with Jin-Yong Cai, executive vice-president and CEO of the IFC. FT editor Barber first asked him to define sustainability, and he said that it wasn’t just about social and environmental motives. He spoke about so-called ‘financial sustainability’ and described sustainability as one of the most important de-risking tools available.

After a short networking break, the second achievement in inclusive business interviewee, Mitchell Elegbe, CEO of Interswitch in Nigeria, spoke about his firm. He described the pre-funded cash card that his business had developed, allowing people in the country to deposit or withdraw money electronically.

The second panel discussion of the day came next. The four panellists, moderated by the FT’s John Willman, looked at how to sustainably deliver public goods such as water, food and energy, particularly in developing economies.

Alan Kyerematen, head of the African trade policy centre at the UN Economic Commission for Africa and a former Ghanaian politician, said, “The only way we can deliver sustainable products on a sustainable basis is to allow markets to work with minimum distortion.”

A representative from the charity Oxfam posed a question to the panel about women smallholder farmers. She said over 50% of agricultural workforce was female, but is “largely unrecognised” and “likely unpaid”, and asked how addressing this gender gap would support the transition to a sustainable agricultural system.

In response, Nicko Debenham, head of cocoa at Armajaro Trading, said women need to get themselves in male farming groups in order to have a say and get appropriate rewards for their work. He added that females tend to do nursery work rather than make crucial decisions, and therefore are often neglected in the rewards process. Finally, he called for education of the men, but described this as a “challenge”. 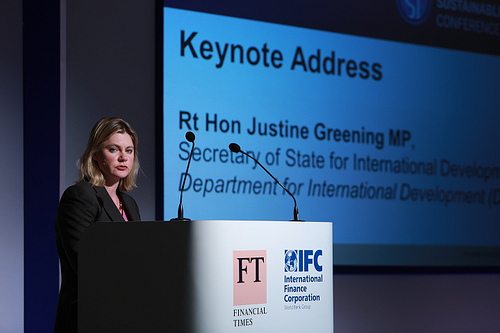 Following a lunch break, the conference’s first keynote speaker took to the stage. International development secretary Justine Greening spoke about social impact investment, and unveiled two government programmes to push the strategy out to a wider investor base.

These are a new initiative called Advancing Impact Management Skills (AIMS), which will educate the “new generation” of impact investment specialists in parts of Africa and Asia, and a network of fund managers, which will guide these new professionals through investments that seek to tackle health, education and water challenges.

Speaking after the conference, Greening said, “Part of the solution to hunger in Africa is for Africa’s farmers and agricultural sector to be able to produce the food it needs for itself.

“Smart UK investment like this will help thousands of farmers develop their businesses to grow food for millions, whilst generating revenues that can be reinvested back into Africa’s agricultural sector.

“This sort of innovative, self-sustaining, job-creating investment which generates a return that can be itself reinvested will become an increasingly important part of DFID’s development approach.”

Between Greening’s speech and the third and final panel discussion of the day was the third project interview. This time, Lerionka Tiampati, CEO of the Kenya Tea Development Agency, spoke about his firm, which works with Kenyan tea farmers to help them increase the yield and improve the quality of their crops. This is on top of attempting to overcome challenges posed by climate change.

The next panel discussion sought to tackle inefficient information spreading, which organisers said is often a barrier to “more effective” private sector financing.

Speaking about environmental, social and governance (ESG) – the lens through which sustainable investments are made and assessed – David Harris of FTSE Group said demand has grown in the last decade. Ten years ago, it was “niche”, he added, but there have been “fundamental” changes since then.

Like the IFC’s CEO Jin-Yong Cai, Harris said institutional investors were beginning to use ESG screening, not because it’s ethical to do so, but because it adds long-term value to the process.

He accused pension funds of short-termism, saying they were often “running a marathon” but “hiring people that specialise in sprints”.

Meanwhile, Alex van der Velden, partner and chief investment officer at Ownership Capital, said questions around ESG were “not black and white” and that all companies have ESG challenges.

Luis Juan Oreta, chief financial officer at Manila Water in the Philippines, and Leonidas Lopez, president of Universitaria Minuto De Dios in Colombia, each then spoke for around 10 minutes about their respective projects. After this, delegates were invited to vote for their favourite of the five businesses – which Universitaria Minuto De Dios won.

On the night, the same result occurred, though the Colombian firm had to share the achievement in inclusive business award with the Kenya Tea Development Agency.

The final segment was a keynote address from FT journalist Martin Wolf, who instead of exploring sustainable finance spoke about financing sustainability and making finance sustainable.

“In general, things have got safer and more reliable”, he said, “So why is finance such a catastrophe?” Read a more in-depth review of Wolf’s speech here. 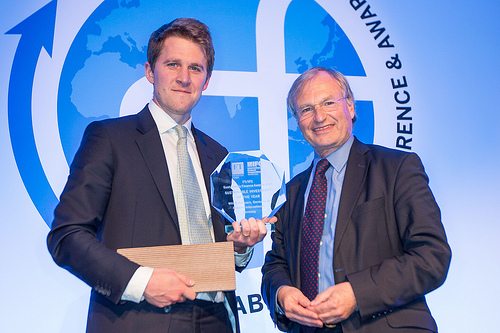 The FT and the IFC handed out awards for excellence in sustainable finance and investment at an awards dinner in the evening. Among winners were Impax Asset Management, Standard Bank (South Africa) and WHEB Partners, for its investment in German firm Resysta International.

Speaking to Blue & Green Tomorrow, Alexander Domin of WHEB said, “We are delighted that our investment in Resysta has been awarded sustainable investment of the year at the FT/IFC Sustainable Finance Awards.

“Resysta has developed a novel eco-friendly wood substitute material with the high-end look and feel of tropical hardwood. Resysta does not splinter, rot or crack, and is the material of choice for all applications where surfaces can come into contact with water or moisture.

“We have been working with Resysta to roll out the material world-wide and have seen the company significantly increase its revenues.”

There are many who would be sceptical about ‘sustainable finance’, and others who believe it to be an oxymoron. But the business leaders and policymakers on show at the FT/IFC Sustainable Finance Conference and Awards, who are doing incredibly innovative things to move the system onto a more sustainable, long-term footing, would wholeheartedly disagree.

We praise the FT and the IFC for putting on an excellent event.