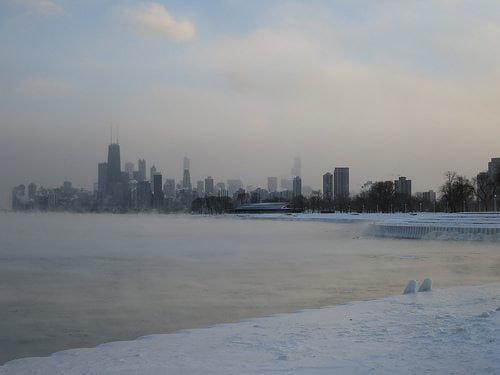 On Monday the ever-reliable Jon Stewart, host of the The Daily Show on Comedy Central and frequent arbiter of good sense, returned from his Christmas break wishing to avoid controversy and, he said, wanting to avoid hot-button issues such as politics and religion. Instead, he wanted to talk about something non-polarising and benign. Something like the weather.

The US, of course, is currently in the midst of a record-breaking cold spell. Such extreme conditions, blamed on a weather pattern known as a polar vortex, should surely give Stewart plenty to talk about?

After all, in Kentucky, an escaped prisoner has apparently turned himself in to get out of the cold. Even the town of Hell, Michigan, has frozen over.

The lowest recorded temperature of -37C, measured in Embarrass, Minnesota, is colder even than readings recently recorded on Mars.

So far so good, as Stewart happily browses through clips of reporters talking about just how cold they are, until, inevitably, one anchor questions how global warming “alarmists” are “still trying to push their radical position.”

“Yeah, that’s your fucking opinion”, Stewart rages. “It means nothing.”

He continues, “Global warming: just one more liberal conspiracy, because even though there is a great deal of scientific data establishing climate change and even though many of the models for global warming predict more extremes of weather – not just warming – apparently decades of peer-reviewed scientific study can be – like a ficus plant – destroyed in one cold weekend.”

It is easy to understand Stewart’s theatrical frustration. The conservative outlets’ arguments seems to be based on little more than an interpretation of global warming as meaning everywhere on the globe will be getting warmer all of the time. It brings to mind the old argument, sometimes still employed by sceptics, that scientists had to change the name of the phenomenon from global warming to climate change after the ice caps failed to instantly disappear. As Skeptical Science blogger Graham Wayne points out, “The IPCC was formed in 1988, and the CC doesn’t stand for Comedy Central.”

Of course, one sustained cold period in one part of the world does not disprove climate change. Nor does it prove it, as no one really seems to be arguing, despite the strawman arguments constructed by some deniers.

As NASA explains, there is a difference between climate and weather: “Weather is basically the way the atmosphere is behaving, mainly with respect to its effects upon life and human activities […] Climate, however, is the average of weather over time and space.

“An easy way to remember the difference is that climate is what you expect, like a very hot summer, and weather is what you get, like a hot day with pop-up thunderstorms.”

One localised cold front does not negate a long-term trend and make irrelevant decades’ worth of rigorously measured warming. Scientists have estimated that even in the worst-case scenarios for the year 2100, where global temperatures would have raised in excess of 4C, we would still see seasonal changes in temperature.

It also cannot be ignored that this cold snap is uncharacteristic of the last couple of months. November was the hottest on record, with temperatures in Russia, for example, reaching as high as 8C above the monthly average.

Regardless of the claims made by certain deniers, you will find very few experts willing to say that any isolated incident of extreme weather is categorically caused solely by climate change, largely because any expert will know that is not how meteorology works.

Speaking to Channel 4 last week about the unrelenting flooding currently afflicting the UK, veteran meteorologist Michael Fish said that while he was “convinced” that floods, hurricanes and increasingly extreme weather across the world are being worsened by the global trend, “One such event you can’t pin on global warming or climate change.”

Some scientists have suggested that global warming might have caused the polar vortex’s visit to the US. This is because the jet stream – a belt of fast westerly winds that act as a boundary between cold northern air and warmer southern air – has been weakened, allowing a system of swirling polar air – the ‘vortex’ – to move south. It has been suggested that this erratic failure of the jet stream may indeed be the work of global warming.

Of course, all of this information is readily available to the misinformed news anchors that are raising Jon Stewart’s blood pressure with every syllable. If only they would listen to the professional, peer-reviewed evidence.

Yet instead they turn to the likes of Donald Trump for analysis. “It’s freezing”, the billionaire tycoon and prominent climate denier says.

“So global warming must be a hoax”, Stewart responds, raising an eyebrow towards a picture of Trump sporting a rather unconvincing head of hair.

“Because, I mean, Mr Trump would never conceal bald-faced truth or go through any effort to hide when something’s clearly receding over the years.”