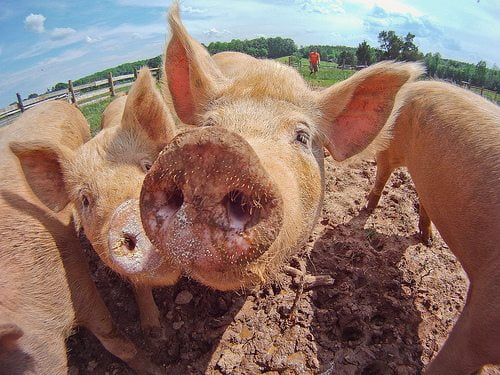 The Pig Idea is a new initiative to feed pigs with food wasted by supermarkets and kitchens – a practice banned by the European Union following the spread of mad cow disease. Ilaria Bertini investigates.

Following research that shows up to half of global food never reaches a human stomach, a campaign is calling for wasted food to be given to animals – specifically pigs.

Pigs have been used for centuries to dispose of organic waste, at least until this practice was banned by the EU in 2001, amid fears that it could lead to diseases such as bovine spongiform encephalopathy (BSE), also known as mad cow disease, which was linked to the presence of animal protein in the food given to cows.

However, campaigners from the Pig Idea claim that the ban should be lifted for pigs, as they are omnivores and controlled feeding on food waste would help reduce the cost of imported grains such as soya – whose production is 97% used for animal feed.

“The British foot and mouth outbreak of 2001 that resulted in the ban of feeding animal byproducts and catering waste to omnivorous non-ruminant livestock (pigs and chickens) allegedly stemmed from one farmer slacking in his swill preparation leading to the inclusion of infected meat products in his pigs’ diet.

“The proposed eco-feed industry would source food waste from restaurants, institutional kitchens and catering facilities and abattoirs to then be processed for a required time and at a specified temperature to ensure all risks of pathogens and disease had been removed as it happens in  South Korea, Japan, North America and China. This practice is proven to be completely bio-secure and results in nutritious feed for the pigs with no risk of spreading diseases to animals or consumers.”

The campaign aims to tackle food waste, lower the costs for farmers and reduce the environmental footprint of animal farming, which in 2006 was estimated by the UN to be greater than the transport sector.

Indeed, as Colbert noted, pig manure has been responsible for many cases of severe pollution especially to waterways and caused eutrophication for instance in the US.

“However, pigs can play a valuable role in our ecosystem both as fertilisers and as food waste recyclers to create pork”, he said.

“When reared sustainably, under high welfare conditions, pigs do not require the same amount of chemicals in their diets, nor the high levels of antibiotics.”

Colbert added that the Pig Idea is aware of the high environmental and social cost of animal farming: “Feeding food to livestock that has been grown and could be fed to the world’s hungry people is not only immoral but it is also unsustainable. People do need to reduce their meat consumption as a whole and the Pig Idea is a proud supporter of the Eating Better campaign which seeks to change the way we think about meat, both in terms of quality and quantity.”

The Pig Idea campaign also brushed off claims that it was somehow suggesting edible food should be given to animals instead of people in need, with Colbert saying, “When food is being wasted throughout the supply chain that cannot be consumed by people, it should instead be being fed to pigs and chickens.”

In between the horsemeat scandal which occurred in the UK earlier this year, the EU announced it was considering lifting the ban on feeding animals with processed animal proteins (PAPs) – which include intestine, bones, blood and feathers – in relation to pigs and chickens, starting from 2014.