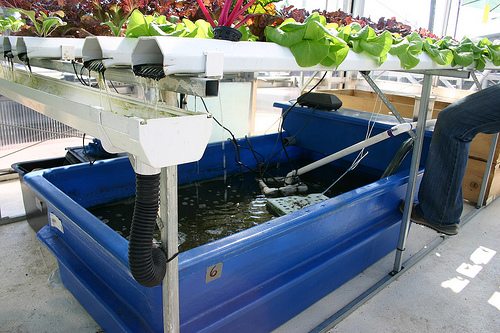 The role of aquaponics in food production: prepping for a sustainable future

Aquaponics – A farming method that is somewhat unorthodox and relatively uncommon in today’s shifting conditions, but at the same time symbolises a great deal of significance and represents a very intriguing prospect.

This farming method could harness the potential of food crops worldwide and fulfil a vital role in enhancing the delivery of sustainable food stocks and agriculture, in a world struggling to overcome food shortages and rising food costs.

The OED defines aquaponics as “a system of aquaculture in which the waste produced by farmed fish or other aquatic creatures supplies the nutrients for plants grown hydroponically, which in turn purify the water”.

Aquaponics has featured on episodes from the television series Doomsday Preppers which previewed exclusively on National Geographic.

Preppers – described as individuals who actively stockpile supplies as a preventative technique in order to minimise the threat from major catastrophes, such as the collapse of economies, acts of insurgency and terrorism, war, fuel and food shortages and nuclear fallout. For devoted preppers, aquaponic systems could certainly become part of their essential preparations, and may well be seen as an ultimate preppers’ paradise.

The possibilities of aquaponics are apparently endless as water is recycled within the tanks enabling you to conserve large amounts of water when compared to traditional methods of farming. There are no real hidden chemicals in aquaponic systems as secreted waste from the fish acts as a natural fertiliser. Food is only required for the fish in question, which is also a positive as it reduces expenditure on additional fertiliser and other chemical ingredients.

Generally, foods crops such as vegetables grow at a faster rate in comparison to foods grown in conventional farming locations. Solar panels can be interlinked into the pump running setup and process, therefore generating and retaining cleaner and renewable sources of energy.

Obviously at first glance this sounds like a glorious proposition, but like any other agricultural method there are perceived dangers and challenges associated with it. As with any other system, it requires the correct equipment, proper fitting and a structured management system. There are safety concerns and risks involved in this method of food production, such as bacterial contamination and excessive numbers of insect pests.

In some cases the space required could be minimal although it may be difficult to secure necessary plot sizes, especially in intensively built-up areas. In commercial properties and grounds the expense faced to install and integrate a commercial sized aquaponic system may be considerably high.

A report published in January indicated 30-50% of food produced globally is wasted. Aquaponics expands the realms of possibility, reduces adverse impacts on the environment and takes full advantage of the renewable energy sources on offer.

With the world experiencing a scarcity in food stocks and rising food costs, aquaponics could be seen by many as another resourceful avenue to explore, and one eventual operation that could advance the efficiency and renewable nature of sustainable agriculture and food production.