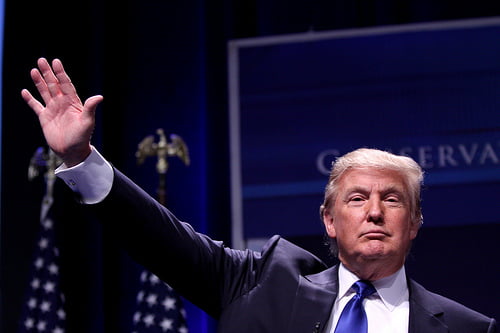 The US billionaire touched down at Aberdeen airport on Sunday April 22 ahead  of his appearance before the Economy, Energy and Tourism Committee at the Scottish Parliament on Wednesday to stand against plans for an 11-turbine European Offshore Deployment Centre off the coast of his £750m luxury golf development at Menie, Aberdeenshire.

The tycoon, who spent most of Monday fine-tuning his golf course development before heading to Edinburgh, said that if the wind farm went ahead then the full-scale development would end after the course is opened later in the year and the clubhouse building was complete.

He remarked, “It will be a golf course and it will be a beautiful clubhouse and that will be it. That’s not what I want.

“We have a concept for a hotel which will blow everyone’s minds but I can’t have a hotel looking in to those windmills.

“I just want what’s good for Scotland and also what’s good for my course. I built the greatest course in the world and I don’t want it tarnished by this industrial junk that doesn’t even work looming over it.”

Trump’s idea of this so-called “industrial junk”—a proposed £150 million venture to be pioneered by Swedish utility company Vattenfall in partnership with engineering firm Technip and Aberdeen Renewable Energy Group—was brought to life earlier this week by a full-page advert that Trump took out in the Aberdeen Press & Journal.

It showed a misleading photograph of 11 rusty wind turbines under the headline: “Welcome to Scotland”—a photograph that was in fact taken in Hawaii.

If his desire is to protect the Scottish tourism industry with all of this trumpeting of heritage, then where is his evidence that wind farms do, in fact, damage tourism?

Incidentally, Trump’s claims don’t marry well with new research that suggests tourists visiting Scotland do not see wind farms as a problem. In a survey commissioned by tourism agency VisitScotland, about 80% said a wind farm would not affect their decision about where to take a holiday.

Trump’s arrival has also coincided with publication of a YouGov opinion poll by Scottish Renewables that highlights the backing of renewables by the Scottish public.

Of the 1041 people surveyed, 38.81% strongly agreed with the statement: “I support the continuing development of wind power as part of a mix of renewables and conventional forms of electricity generation.” A further 32.52% said they tended to agree. The poll reveals that overall 71% of people in Scotland support wind power as part of the energy mix. This compares to just 7% who strongly disagree with the statement.

The weaknesses of Trump’s backlash to the proposals crystalized in his appearance in front of the Economy, Energy and Tourism Committee on Wednesday morning.

He argued again that the appearance of turbines will destroy the tourism industry. He went on to say that wind farms are fine in “industrial locations”, but that they should not ruin the countryside.

Yet those latest public opinion polls reflect the efforts made by the Government to ensure that offshore and onshore wind developments will continue to go ahead in a sustainable Scotland.

From an environmental perspective, this means carefully selecting sites for wind farms and ensuring that the environmental value of Scotland’s natural ecosystems is preserved—it does not mean following the notion that the countryside and coastline should be completely untouched.

Such a view is frankly unrealistic and outdated. And in response to Trump, wind farms cannot simply be erected in places where the wind blows significantly less than in others. It is the blustery coastline and high-altitude winds typical of Scotland which produce the abundant source of wind energy necessary for turbines to work efficiently.

The tycoon later in the debate claimed, “You are spending billions of pounds unnecessarily and it will affect Scotland.

In economic terms—as Salmond has highlighted repeatedly—the renewables industry will in fact create thousands more jobs through growth of the supply chain in old industrial areas and rejuvenate those communities most in need. This is a concept Trump seemingly fails to grasp.

International turbine manufacturer Gamesa has already announced plans to build a £125m turbine plant at the port of Leith in Edinburgh, creating over 800 jobs and helping reindustrialise a place characterized by the effects of twentieth century economic decline.

For a man famed for his boldness and lack of subtlety, it is hardly surprising that Trump overlooks the key reasons why the inclusion of wind power is paramount to Scotland’s energy mix and the re-industrialisation of its economy.

But interestingly, recent studies suggest a shift in Scottish public opinion away from wind towards wave and tidal power in the efforts to encourage the country’s renewables drive.

A YouGov survey by Friends of the Earth in The Scotsman showed that 32% of Scots first choice for future energy is wave and tidal, compared to 18% for wind power.

The important thing for Scotland is to continue supporting a full mix of energy, such as solar, hydro, wave and tidal, as well as offshore and onshore wind.

So long as the investment commitment to develop and improve cost-effectiveness of renewable technologies remains, the 2020 renewable energy targets can still be met.

One nation should be able to resist the flimsy views of anti-wind campaigners—especially those staged by the ridiculous sideshow that is Donald Trump. Most probably, his ill-informed anti-wind noise will ruin his chances of getting his own way this time round.

If you want to support the future energy security of the UK, we encourage you to visit Good Energy, the UK’s only 100% renewable energy provider.