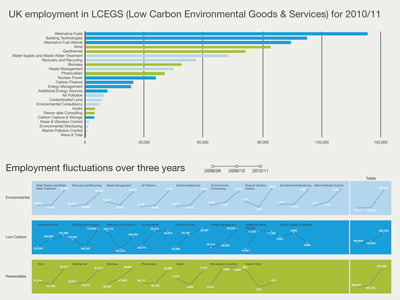 Figures released by the Department of Business, Innovation and Skills show that employment within Low Carbon Environmental Goods and Services (LCEGS) sectors grew to 939,627 in the UK during 2010/11.

Blue & Green Tomorrow has produced a graphic to show the employment distribution across the three main sectors (environmental, low carbon and renewables), and how these figures have fluctuated over the last three years. 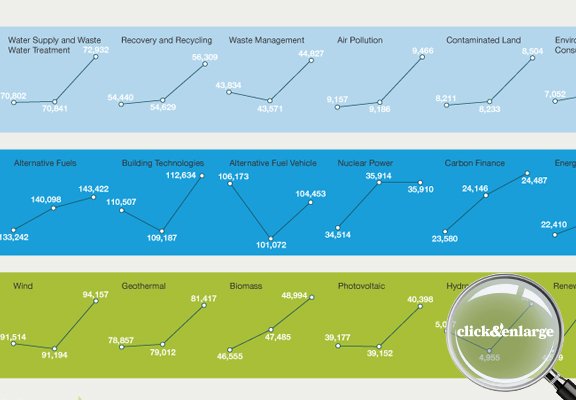 The first chart ranks all the jobs by total employment using the most recent figures. Jobs in the low-carbon sectors occupy the top three spaces with alternative flues, building technologies and alternative fuel vehicles employing more than 100,000 people each.

Renewable energy positions also feature heavily in the top half of the chart. The wave and tidal sectors are at the bottom, though, employing just 570 people.

The lines in the second part compare employment figures using the last three years of data.

All jobs in the environmental sector have shown signs of growth over this time, and with the exception of wave and tidal, the same can be said for renewables.

Employment within the low-carbon sector has shown the greatest signs of turbulence, but by the end of 2011 these positions still account for almost half of the jobs across all LCEGS.