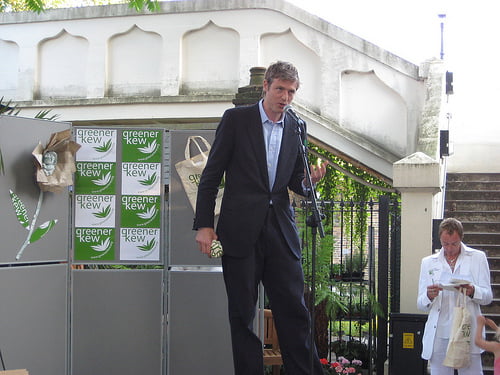 After Silva, El Ali and Lidegaard comes the UK’s first representative in our rundown of some of the most environmentally-minded politicians from across the world. Charlie Wood profiles Conservative MP, Zac Goldsmith.

In an era of wild-child billionaire heirs and heiresses, Zac Goldsmith has not been cut from the same cloth. The late Sir James Goldsmith was a high-profile and successful financier and, in his later years, a politician and thorn in the side of the Conservatives. His son has, from a young age, focused his energy on doing his bit for the planet.

As a boy of eight, Goldsmith made his first forays into ecological campaigning when he put ‘Free Your Bird’ posters up around his hometown of Richmond, after he was deeply affected by the condition of his neighbours’ caged dove. Goldsmith senior nurtured this compassionate impulse in his son, giving him the book Ancient Futures by Helena Norbert-Hodge and inscribing, “This will change your life” on the front cover.

The young Zac was also a fan of both Gerald Durrel and David Attenborough and, when thinking back to that time some years later, reminisced on the perilous plight of the planet: “I knew from an early age that I would do something to try and help the situation be reversed. I had no idea how. Most people reach a point where they have to be pragmatic to earn money and their other concerns become secondary. I didn’t have that kind of pressure.”

Goldsmith has been a prominent figure in environmental politics since taking over the editorship of his uncle’s magazine, The Ecologist, in 1998. During this time, he campaigned on local and international issues, including championing organic farming (of which he is a consistent and staunch advocate) and working with the Mihai Eminescu Trust to promote conservation and maintenance in Transylvania.

In 2005, he became a central figure in new Tory leader David Cameron’s modernisation drive, when he was appointed deputy chairman of conservative environmental policy group Quality of Life. Goldsmith co-authored a report that was largely adopted into the Tory 2010 election manifesto, despite opposition from the more traditional wing of the party, and was placed on the party’s ‘A-list’ of parliamentary candidates and subsequently selected to fight for the Richmond Park seat, which he duly won.

Since entering parliament, Goldsmith has surprised many people with his detachment from the coalition. His proximity to Cameron before the election suggested his star was on the rise within the party, but a propensity towards disloyalty (or integrity, many would argue) has seen him fall foul of the regime.

Joining the rebellion of 81 Tories that voted for an EU referendum (which was also in his party’s manifesto) cost Goldsmith a job as EU envoy on climate change, and he has repeatedly threatened to resign his seat and trigger a by-election if the Tories drop their opposition to a third runway at Heathrow.

He has also stated that he will not defend his seat at the next election if the party changes its current platform regarding aviation capacity. This is an issue that Goldsmith feels strongly enough about to risk losing influence within parliament, and shows the same conviction that led him to turn down a Tory safe seat to contest his local marginal constituency.

Such integrity is rare amongst the career-oriented politicians of parliament, and if the platform change was to come about (and it is not beyond the realms of possibility) then Goldsmith’s convictions may lead him to fall on his sword at precisely the time he would be most needed.

For his sake, and for the sake of environmental politics within parliament, we should hope an alternative can be sought.