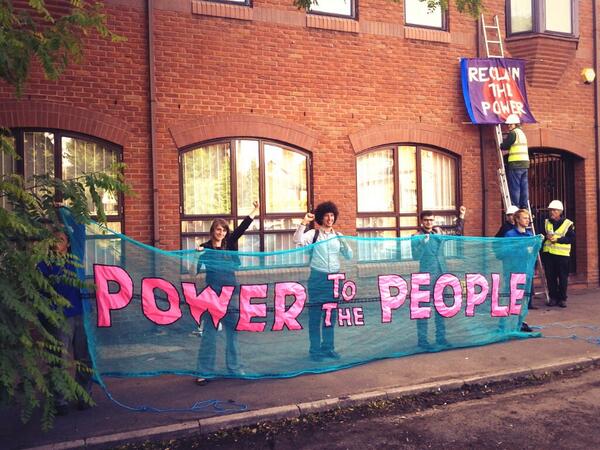 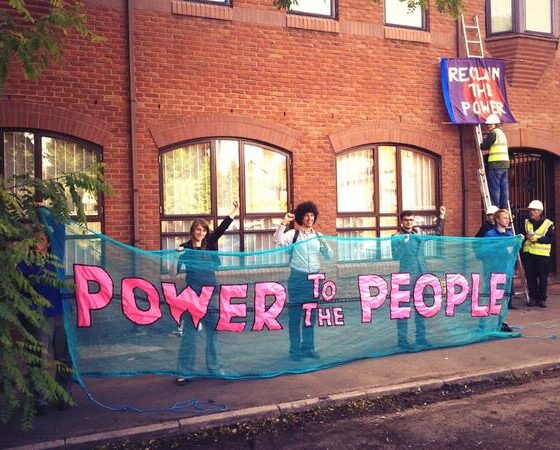 Action from over a dozen activists has shut down the Staffordshire headquarters of Cuadrilla Resources, the firm whose exploratory shale gas drilling in Sussex has been met with widespread protest in recent weeks.

Twenty men and women blockaded the office in Lichfield, with a further two protesters able to make their way into the building itself. They object to Cuadrilla’s fracking operations, which they claim represents an environmental threat to the UK.

The action forms part of a day-long, UK-wide protest, which has also seen protesters occupy the offices of Bell Pottinger – the London PR firm that works on behalf of Cuadrilla.

The individuals behind the stunts are associated with Reclaim the Power, which was set up as an offshoot of No Dash for Gas – the group that helped shut down EDF’s West Burton power station in Nottinghamshire in 2012.

On Friday, Reclaim the Power began a five-day action camp at the Balcombe site where Cuadrilla had begun exploratory fracking. Its aim was “to stand in solidarity with the local community in opposing dirty fossil fuel extraction”.

One of the protesters at Cuadrilla’s HQ, Debby Petersen, said, “Whilst local resistance at Balcombe has halted Cuadrilla’s operations for the time being, in this HQ in Lichfield they are planning further dangerous exploration for shale gas in the UK, which cannot be allowed to continue.

“We need to reclaim our energy system from the hands of corporations that will frack our countryside, crash our climate targets and send fuel bills through the roof.”

She added, “This is a once-in-a-generation opportunity to transition to a decentralised, clean, affordable energy system that communities have control over. Our action will send a strong message to EDF, Cuadrilla and other companies that neither Big Gas or fracking are the answers to our energy future.”

Opponents of fracking say it contaminates water, causes earth tremors and pollutes the atmosphere. However, those in favour – including David Cameron – say it will be economically beneficial and help move Britain onto a low-carbon trajectory.

The prime minister recently said that the UK “cannot afford to miss out on shale gas”.