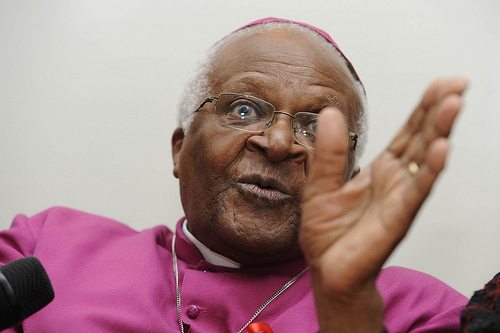 Arcibishop Desmond Tutu has urged the University of Cape Town (UCT) to drop investment in polluting fossil fuels because of their contribution to climate change, which is heavily affecting the world’s poorest people.

The bishop and Nobel peace prize winner has encouraged the South African university to follow the example of many colleges and universities in the US that have moved their money away from fossil fuels and directed it to low-carbon projects.

In a letter to UCT, Tutu said, “It is the world’s wealthiest countries and people who have benefited most from the use of fossil fuels, and have contributed most to global warming. It is time we took full responsibility for our past actions.

“People of conscience need to break their ties with corporations financing the injustice of climate change. I ask UCT to examine urgently the extent of your investments in fossil fuel companies and to make a strong commitment to phasing them out as soon as possible.”

Tutu had previously called on governments, universities and religious institutions to divest from dirty energy companies in an ‘apartheid-style’ boycott, similar to what was done with South African firms during the years of racial segregation.

The divestment call has been backed by divestment group 350.org. Ferrial Adam, team leader for Africa and Arab world at 350.org, commented, “If it is wrong to wreck the climate, then it is also wrong to profit from that wreckage. Coal and fossil fuels need to stay in the ground if we are to have any chance of reducing CO2 emissions, minimise global warming and prevent more Africans being affected by rising temperatures and increases in drought and flooding.

“Africa will be hardest hit by the impacts of climate change so it is fitting that fossil fuel divestment campaigns have now reached our continent. This is just the beginning.”

An increasing number of religious and higher education bodies has backed the case for fossil fuels divestment, not only on environmental but also financial grounds, given the issue of the so-called carbon bubble, which implies investment in fossil fuel reserves that will have to stay in the ground to beat climate change will become stranded assets.