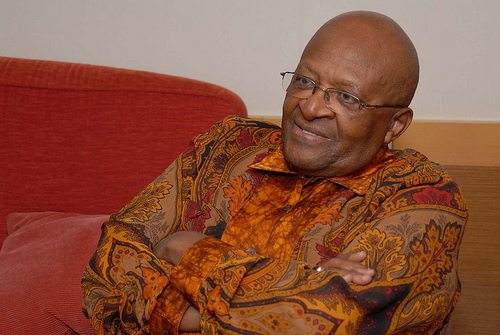 Eminent bishop and Nobel peace prize winner Desmond Tutu has called on businesses to cut ties with the fossil fuels industry, in the same way as they did with South African companies during apartheid.

Writing in the Guardian, Tutu said that there were many ways people can raise their voice against companies that contribute to climate change. They can boycott sports events that they sponsor, campaign to put health warnings in their advertisements and ask for universities, religious institutions and local authorities to drop their shares in such firms.

He added, “We can actively encourage energy companies to spend more of their resources on the development of sustainable energy products, and we can reward those companies that do so by using their products. We can press our governments to invest in renewable energy and stop subsidising fossil fuels.”

Tutu said there was no point in investing in companies that undermine the future for the next generations and that clear science around climate change means that there are no more excuses not to act.

“During the anti-apartheid struggle in South Africa, using boycotts, divestment and sanctions, and supported by our friends overseas, we were not only able to apply economic pressure on the unjust state, but also serious moral pressure”, he wrote.

“We cannot necessarily bankrupt the fossil fuel industry. But we can take steps to reduce its political clout, and hold those who rake in the profits accountable for cleaning up the mess.”

He also spoke out against a world “dominated by greed” and added that humans had put profit before the interests of the planet.

He concluded, “To serve as custodians of creation is not an empty title; it requires that we act, and with all the urgency this dire situation demands.”