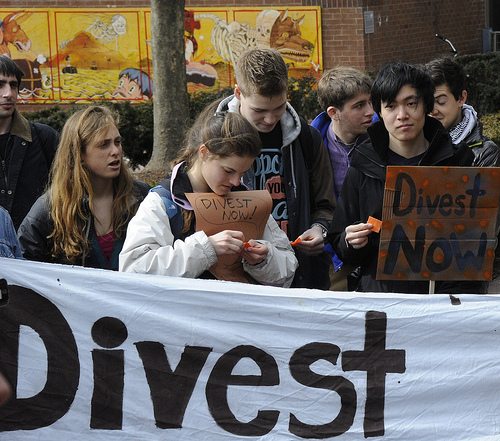 Student group People & Planet has kicked off a week of national action in an effort to convince UK universities to divest from fossil fuels companies, as coherent and concrete action to tackle climate change.

In Hull, students will organise a sit-in, while at the University of East Anglia, students are prepared to challenge the decision made by the institution to reject the divestment proposal on the basis that the university was “not fundamentally a campaigning organisation”. It added that it “does not seek to take positions on sensitive or controversial issues which do not further… our charitable purposes”.

James Farndon, People & Planet spokesperson, said, “Universities UK has publicly committed to tackle climate change, yet individual vice-chancellors show complete hypocrisy when it comes to their endowment investments and other partnerships with the very companies causing the climate crisis in the first place.

“If it’s wrong to wreck the climate, it must be wrong to profit from that wreckage. Divesting from fossil fuels is not only the right thing to do; it’s also financially prudent according to experts ranging from the head of the World Bank to the UN climate chief Christina Figueres”.

On Valentine’s Day, students will be distributing cards to vice-chancellors, asking them to dump fossil fuels and stop “in the name of love”.

People & Planet revealed in a report in December that UK universities had ties with fossil fuels companies worth an estimated £5.2 billion.

The divestment movement has gained particular traction in the US, where students at major universities such as Harvard, Yale and Brown have urged institutions to pull out of fossil fuels – to varying degrees of success.