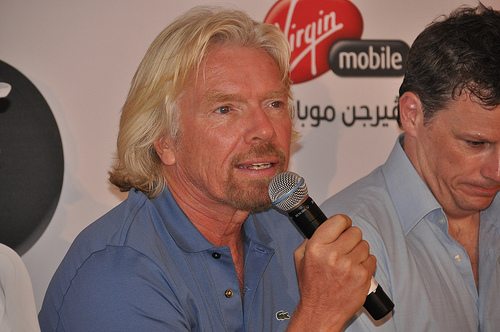 Sir Richard Branson has said he was “enormously impressed” by Apple CEO Tim Cook, who told climate sceptic investors last week that their money was not welcome at the firm.

Writing on his blog, the founder and chairman of the Virgin Group said responsible businesses should follow the example set by Cook, who was responding to a conservative thinktank claims that Apple’s sustainability programmes were not profitable.

Cook said that Apple does many things for motivations other than profit, in order to make the world a better place. He added that if shareholders disagreed, they could always get out of the stock.

Branson wrote that he “wholeheartedly support” the Apple chief in this calls, and contested the widespread criticism of climate science.

“If 97% of climate scientists agreeing that climate-warming trends over the past century are due to human activities isn’t compelling data, I don’t know what is”, he wrote.

Virgin has long focused on sustainability, and has pledged to cut carbon emissions from its airlines by 30% by 2020. It is also working on an algae biofuel to replace polluting fuels.

Branson himself has always indicated that protecting the environment is a great entrepreneurial opportunity, founding the Carbon War Room, a pressure group that works with businesses to promote sustainability.

Branson added in his blog, “More businesses should be following Apple’s stance in encouraging more investment in sustainability. While Tim told sustainability sceptics to ‘get out of our stock’, I would urge climate change deniers to get out of our way.”

Branson and the Carbon War Room recently organised an event in the Caribbean to discuss renewable energy potential of 13 nations in the region.