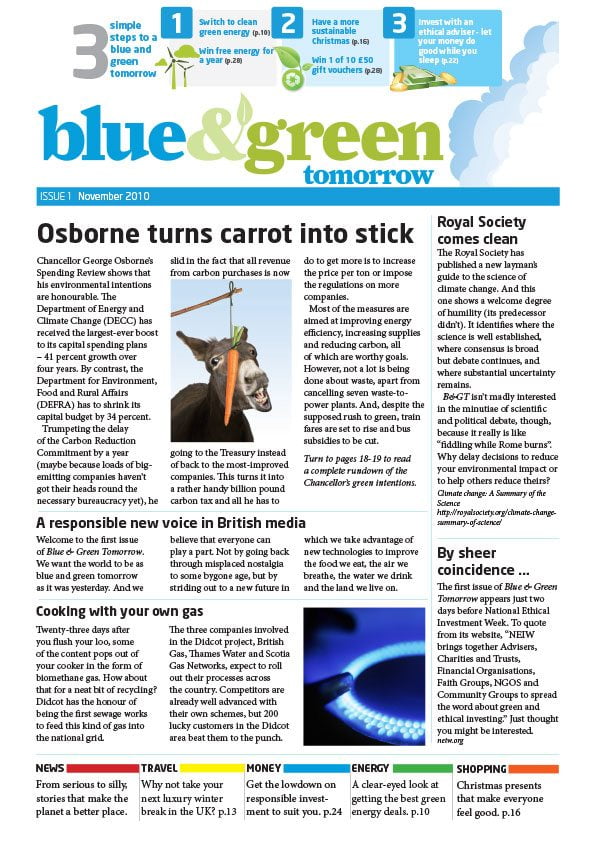 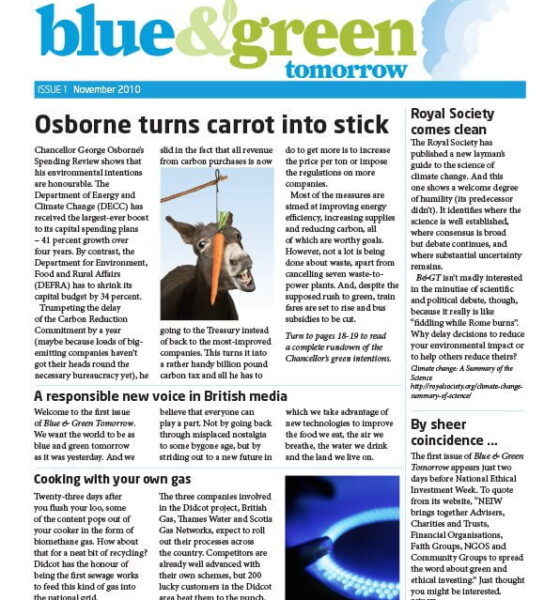 Hello. Welcome to Blue & Green Tomorrow. We called it this because we want our planet to be as blue and green tomorrow as it was yesterday. And we believe that you, our readers, will have a huge impact on this by pursuing your own enlightened self-interest.

At home, at work and at play, you can always make choices. The sum total of the positive choices made by all of us determines the sort of world we’ll live in tomorrow. Choices in favour of clean energy, low-carbon goods and wise investments will help make the world a better place rather than one spoiled through pollution and waste.

Of course, nothing’s perfect, and we all know we can always do better. But it’s still better to do something than nothing; and it’s better to start doing it now rather than wait for climate scientists and politicians to settle their interminable differences.

At heart, Blue & Green Tomorrow is an optimistic magazine. We believe that the world is full of opportunity, for invention, manufacture and services around sustainability. The word is boring, yet it’s probably the right one. We have only one Earth. We can plunder and spoil it and make it uninhabitable for the billions of people who live on it. Or we can reduce our collective footprint while shifting our economic activity in the direction of doing good instead of harm.

Many companies are waking up to the desirability of a “triple bottom line”, or “people, planet and profit” as it’s sometimes called. This isn’t because they’ve had a Damascene conversion from needing to make money. It’s because their customers are increasingly asking them to behave themselves. Or else.

Some organisations resort to “greenwash” to pretend they’re doing things right; but, in this world of instant communications and social networking, none can get away with it for long. And the backlash, when it comes, makes companies realise that deception is no longer a marketing option.

Blue & Green Tomorrow rejoices in good news, but won’t shrink from bad. We believe that the sustainability space holds more of the former than the latter anyway. Often bad news turns out not to be news at all, just vested interests trying to capture some juicy headlines. We’ll steer clear of that kind of nonsense, giving you instead a diet of relevant, interesting, informative and enjoyable news and features.

Of course, if you don’t like what we’re doing, or you’d like us to do something else, please drop us a line. We’d love to hear from you.