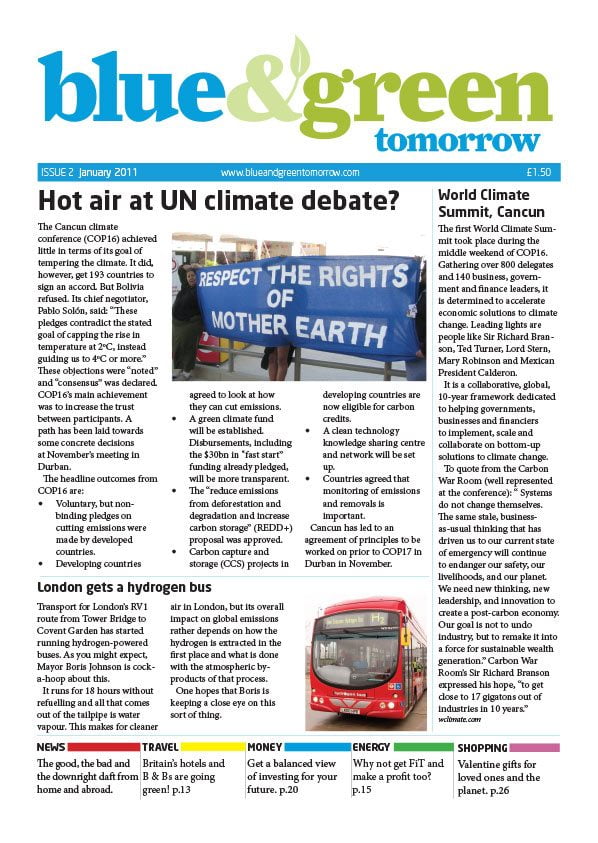 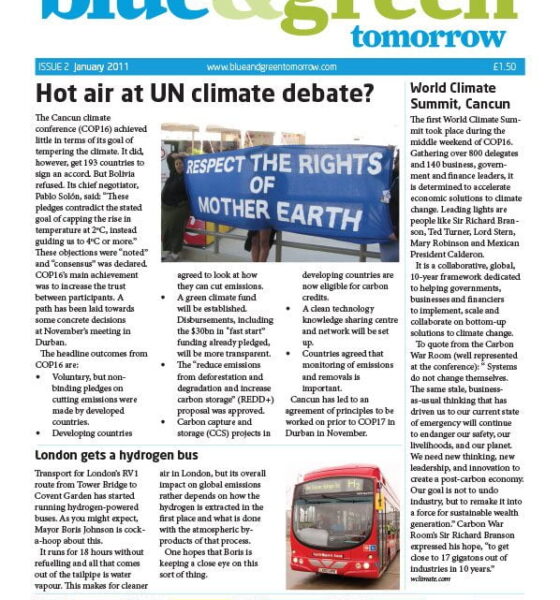 In the previous issue of Blue & Green Tomorrow we asked you for feedback. We really do want to shape the magazine to your needs and interests and we do listen carefully to what you say, good or bad.

A great example of this was the request from Lesley Collins who wanted sober coverage of the UN’s COP series of climate conferences. The ‘received wisdom’ was that not much happened in Cancun apart from a lot of emissions of hot air during the conference and emissions to get there. Well, thanks to reader Lesley Collins, we dug deeper and discovered the parallel mini-conference in which huge businesses from around the globe are pledging to cut billions of tons of emissions and waste from their operations.

Their conference, called World Climate Summit (WCS), is in marked contrast to the main event in which all the countries of the world are seeking a political way forward. This organisation is determined to weld business, finance and politics together. Christiana Figueres, executive secretary of the United Nations Climate Change Secretariat, has pointed out, “The progressive approach [of the COP process] is probably a sane approach but it is in stark contrast to the urgency of the matter.”

So we have a two-speed system: a global political process that has to build in incremental but soundly-based steps and a business and financial system that can be mobilised relatively quickly, and pledge huge savings in realistic timescales. They are driven by other major forces, such as their customers and their bottom lines, which are entirely complementary to their responsibilities to the environment we share.

All of which brings us back to the point of this editorial, which is that, thanks to a reader, we went off on a substantial expedition into the highways and byways of the climate change conference process and, along the way, picked up a lot of interesting (we think) insights. It doesn’t mean we’re going to obsess about this sort of thing, but it is certainly firmly on our radar.

This issue of Blue & Green Tomorrow contains a mix of stories, insights and speculation. Some of it you’ll agree with, some you’ll be able to provide a deeper insight on and some you’ll flatly disagree about. All reactions are okay by us. And we’d love to hear from you so we can start making the magazine a product of all our minds, not just the editorial team and the contributors.

Thank you for your time. We look forward to hearing from you.