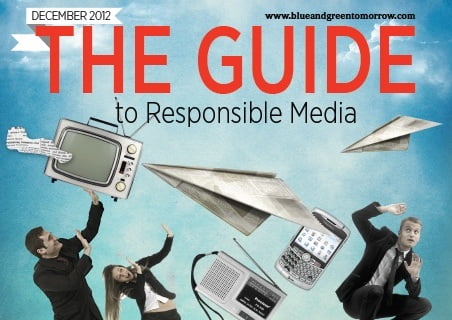 The Guide to Responsible Media – Blue & Green Tomorrow’s final report of 2012 – examines the aftermath of the Leveson report, while also tackling the subjects of press freedom, freedom of expression and regulation. And we’re delighted that the world didn’t end so that we can present it to you.

It features interviews with Hacked Off, the leading campaigning body for a free and accountable press, and Full Fact, an organisation that promotes accuracy in the media, and we look at the difference between freedom of expression and the freedom to mislead, while asking whether we really do have a ‘free’ press – or one owned by powerful people with a specific economic agenda.

There is also a section on climate change – one of the most hotly debated subjects in 21st century media – and why reporting of the issue is often fickle.

Robert F Kennedy once said, “The problem of power is how to achieve its responsible use rather than its irresponsible and indulgent use – of how to get men of power to live for the public rather than off the public.”

Truly independent regulation and more effective redress, coupled with a greater emphasis on ethics and responsibility, would go a long way to reinstalling public confidence in Britain’s essential free press.

On the go? Download the mobile version (6MB file).

You can also access the report on Issuu and Scribd.