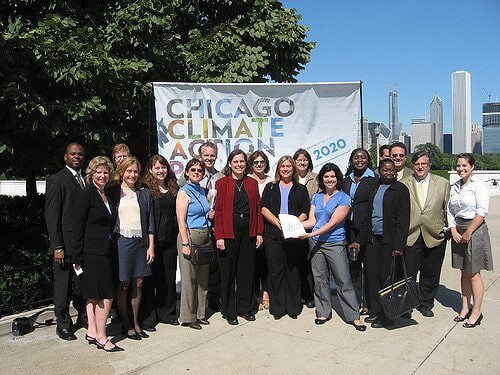 Climate Action Must Continue Before The Opportunity To Change Disappears

How can the climate change movement adapt to coincide with a post-authority World?

The appointment of the new US president elect was understandably viewed by many I spoke with at the COP22 climate summit as a door closing on the opportunity to protect future generations from the pervasive and irreversible impacts of climate change.

The big question remains whether the US will retreat from the Paris climate agreement. Although the incoming President previously called climate change a “hoax”, the potential to create global markets for the clean energy technologies, which the US currently leads, makes it a hard race to walk away from, especially with China promising to step into the void.

However, although the cost of renewable and effective energy efficiency technologies is approaching parity with traditional energy in many markets, globalisation itself is slowing. The World Trade Organization (WTO) cut its forecast for global trade growth this year by more than a third. And as globalisation shrinks, anti-globalisation sentiment is rising.

Against this backdrop, a new degree of protectionism is setting into the cultural consciousness – which is at odds with the global mission to address climate change. In our current times an international view risks disengagement with most the population.

This is evident in the US, where Trump’s slogan, “Trump Digs Coal” hit the mark across many states, despite the solar industry employing more than four times as many Americans as coal. Similarly, in the UK this summer, 48% of the population believing in internationalism, was outvoted by a majority of 52% ‘locally-minded’ voters in the decision to Brexit.

Given the urgency to initiate a safe trajectory to 1.5 – 2°C by 2030, (the equivalent to cutting the combined emissions of the USA and EU in their entirety for that period), how can the climate movement retain relevance?

A key communications strategy of the climate action movement up to now has been to make “totems” of enlightened business leaders; demonstrating to the middle ground that a profitable, independent low carbon community is achievable. This was a logical approach in the old world where influence flows downwards from the top of the pyramid, but that influence is now inverted. In reality, this has led to an echo chamber, in which the alarm on climate change has rung constantly, without being heard by the outside world. In the post-truth, post-authority world, the gap between the leaders and the laggards causes, rather than prevents climate action inertia.

The climate movement must rapidly engage with the new world. Rather than polarising audiences into allies and enemies, it’s now vital to shape a narrative befitting both locally-minded and internationalist values. New leaders now need to emerge, who can articulate a low carbon future that does not leave communities isolated and resentful.

Despite the divide between localism and internationalism, we are generally united in our concerns about climate change. The European Commission’s latest report on climate action shows that 91% of Europeans see climate change as a serious problem, and the vast majority support national action on improving energy efficiency (92%). In the US, nearly two-thirds of Americans say that they are moderately or very interested in climate change.

The statistics indicate a major opportunity to unite disparate and conflicting populations behind a common action and purpose to address climate change. But first, we need to overcome the ‘value action gap’, or the difference between high stated concerns on climate change and low level behavioural responses to the problem. At a basic level, human beings show their support for causes via visible actions; hence why recycling is second nature across Europe, yet most people have not taken switched to a renewable energy supplier. As human beings, we are sensitive to social feedback –we want our neighbours and peers to see that we act in the interests of the group.

The same values apply at a macro scale for brands operating in the climate space – to build advocacy, brands in the climate space need to become visible vehicles for addressing climate change. We need to show, not tell, what a low carbon trajectory offers at a local level, to spur on innovation, jobs, and independence. The rise and rise of the UK community energy is a clear example of how audiences can be engaged in imagining a low carbon future, and be brought on board to build it.

People are best motivated when an action reinforces their identity and sense of belonging to their social group. We must show that climate action can make us proud to be who we are. This is about choosing the right frames. For example, businesses find it hard to overlook that companies involved in addressing societal issues report a 20% rise in employee advocacy & commitment.

Climate action represents national security and order – versus chaos and loss, productivity and innovation versus stagnation. Yet, these deep-seated values have been underused as triggers for action up to now…

The climate movement should not forget the achievements made by its deep alliances across successful business, NGOs and Governments over the last two decades. Events such as COP22, which hosted 20,000 people in Marrakech, are a powerful means for instilling a sense of belonging for those within the club. Yet, now more important than ever, it’s vital to ensure the door is left open for newcomers to enter the tent to collaborate and prosper.