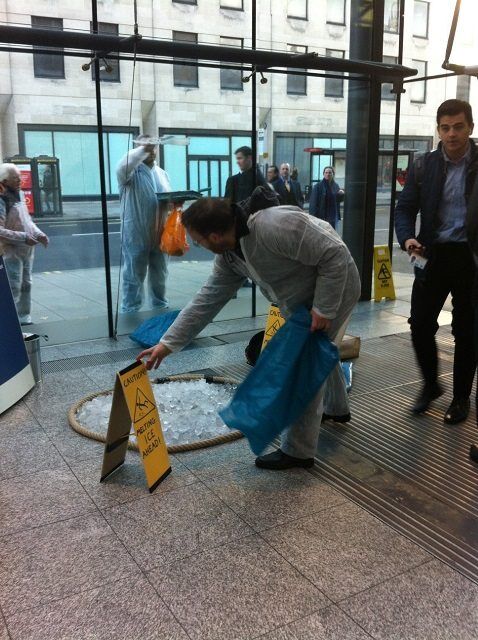 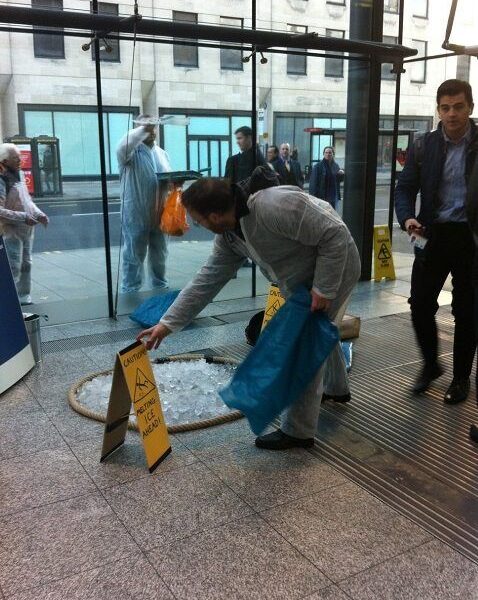 Today a Christian climate change group placed melting ice in front of the entrance to a government department.

This was done with the aim of expression a deep concern at the lack of meaningful action by government to tackle dangerous human-induced climate change which is threatening the creation God has called us to care for.

On the first anniversary of the Paris Climate talks, members of Christian Climate Action also whitewashed walls outside the Department of Business, Energy and Industrial Strategy (DBEIS) to a height of six foot to highlight the fact that current government policies are contributing to melting icecaps and consigning the department to be six foot under water. In its first six months in power, the current government scrapped or amended 13 policies designed to keep fossil fuels in the ground.

Westley Ingram, one of those involved, said:

‘While this government ratifies the Paris climate change agreement in a superficial performance to demonstrate they are taking imminent catastrophic climate change seriously, they have scrapped the Department for Energy and Climate Change.

With no clearly designated minister in the cabinet, climate change is not even mentioned in the title of DBEIS, the department it now officially sits in.

“At the same time we pursue road building, airport expansion, fracking and replacing the burning of coal with wood and gas, along with a raft of other measures completely contrary to keeping carbon in the ground and meeting our obligations under the Paris agreement.’

‘We are Christians who are deeply concerned that the Government is still not taking the predicted dangers of climate change seriously. We believe that God has called us to care for creation. We long to be able to pass it on to those who follow us, in a form which nurtures future generations just as it has nurtured us. Christian teaching makes clear that the goods of the Earth are meant for everyone, so we are disturbed that the people who are suffering most from the effects of climate change are primarily those who live in the poorest countries and are least able to cope with the destruction which they experience.’