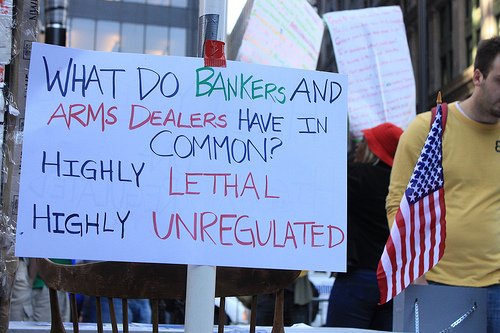 Oxfam and Saferworld have called for stricter regulation within the global arms trade, “as conflicts continue to destroy lives worldwide”.

Oxfam’s head of arms control Anna Macdonald said, “More than one person dies each minute through armed violence. Too much blood has been shed because of the unregulated trade in arms and ammunition.

“History has shown that strong treaties create high international standards and bring about change, even for non-signatories.

“Diplomats need to fill in the missing pieces in the draft text, and make sure they agree a treaty that will save lives.”

UN negotiations on an Arms Trade Treaty will start on Monday and the groups – which are part of the Control Arms Coalition – suggested diplomats should fix the gaps in the existing legislation, in a document named Getting it Right: The pieces that matter for the Arms Trade Treaty.

According to the report, loopholes in the draft text “mean that transfers made under existing defence contracts between Russia and Syria, for example, would not be covered by the treaty” and that arms can easily be provided to human rights abusers.

“We have been fighting for a global agreement on the arms trade for years now and the time has come to seal the deal”, Macdonald added.

“A treaty to bring the arms trade under control is long overdue – but it must be a treaty with teeth. It is time for states to stand up for a treaty that will make a difference.”

The Control Arms Coalition – a global alliance of charities and NGOs – says one of the most serious problems is that the sale of ammunition for small arms and light weapons – an industry worth $4.3 billion – is not fully covered by the treaty, and for this reason, groups have called for stricter control on their transfer.

Back in December, following the tragic school shooting in Newtown, Connecticut, Blue & Green Tomorrow questioned whether only unspeakable tragedy would make investors see the necessity of responsible investment.

This came after Canada’s Globe and Mail’s Inside the Market reporter, David Berman, said he would “not go near a gun stock” anymore, in the fallout to the event.