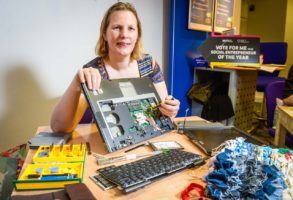 Awards In Edinburgh For Social Enterprise

An award-winning social enterprise creating a sustainable repair and re-use economy in Edinburgh is appealing for votes to aid in rolling out its model across the UK.

Sophie Unwin, Founder of Remade in Edinburgh is one of five people shortlisted for the Social Entrepreneur of the Year Award supported by Lloyds Bank and Bank of Scotland. The winner will be decided by public vote at www.the-sse.org/SEYA Voting closes on 28 October and the winner will receive £10,000.

Remade in Edinburgh teaches people how to repair computers, furniture and textiles, refurbishes goods to sell at affordable prices and campaigns for zero waste.

Founded in 2011 with £60 and six volunteers, in the last year it has opened its new centre, the Edinburgh Remakery, trained 1,000 people, saved 250 tonnes of waste, tripled its turnover and created seven new jobs to increase its workforce to 10.

“We can remake our economy into one that’s sustainable by creating a culture where repair and re-use are the norm. If we win we’ll use the prize money to help communities and local authorities set up Remade businesses across the UK.
“We’d like to see a Remade project in every town and city in the UK. This would be an affordable way to create thousands of jobs, save local authorities costs in landfill tax, and play an important role in building a real green economy.
“Repair creates more than 10 times as many jobs as recycling, and at £20,000 per new job at Remade, it’s a no-brainer that we should be investing in this industry and preventing waste rather than disposing it.”

How to Vote: It’s FREE and everyone can vote twice: once online and once by text so please support us as it will make all the difference to us in our mission.
· Text SEYASOPHIE to 67076
· Go to www.the-sse.org/SEYA

“On average, we can extend the life time of computers by an extra three years, saving people money, giving people confidence, and saving waste to landfill. Our repair appointments are convenient, affordable, and extremely popular”.

“My computer was running very slow and getting too hot, too quickly. I was thinking about getting a new one, but couldn’t really afford one, and didn’t really want to. Sotiris took it apart, whilst telling me what each part did. It all took about 20 minutes. My computer works so much better now. Remade in Edinburgh has saved me a lot of money and saved a lot of precious resources as well.”

“When you teach someone how to repair—you’re passing on more than just technical knowledge. You’re passing on a life skill. You’re teaching independence. And you’re giving them the tools to fight and fix throwaway culture. The world needs more organisations like Remade—so we can teach everyone how to fix the future.”

The £10,000 prize would be used to seed fund a new business, Remade, that would work with local authorities and communities to replicate the Remade business model in their town or city. There are 69 cities and 48,000 towns in the UK. If adopted by just one in ten towns and cities the model has the potential to create almost 10,000 jobs in computer and electronics, furniture and textile repair education. This in turn unleashes many more creative and learning opportunities for students and apprentices and further jobs in a growing repair economy.