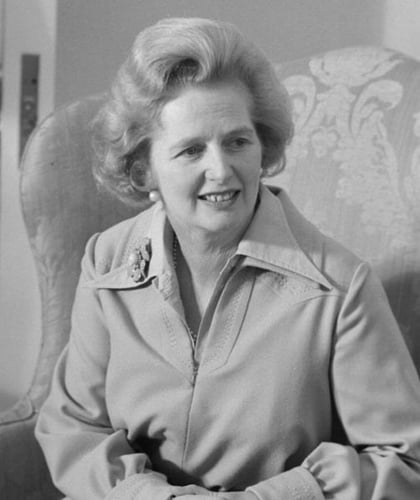 Margaret Thatcher, who died yesterday aged 87, was a deeply divisive leader, but she was certainly a leader. One area of that leadership was in climate change. In 1988, she told the Royal Society, “Stable prosperity can be achieved throughout the world provided the environment is nurtured and safeguarded.” This is the very essence of sustainability.

Fourteen years later, in her book Statecraft, she had come to be deeply suspicious of what she perceived to be the hijacking of the climate change debate by the left.

We should not conflate her deeply held suspicion of state intervention and her intellectual grasp of the science. After all, she had read chemistry at Oxford and used that formidable intelligence to become a barrister. It was in the late 1980s and early 1990s that she recognised the risk of inexorably rising carbon dioxide emissions.

In various speeches to the Conservative Party, the UN and the Aspen Institute, she set out quite a radical environmental agenda. This included protecting green belts, reducing air and water pollution and calling for an international conference on climate change: a call that led to the creation of the Met Office’s Hadley Centre and the Intergovernmental Panel on Climate Change.

In 1988, she spelled out her concern for the environment to the Conservative Party with these words: “No generation has a freehold on this Earth. All we have is a life tenancy – with full repairing lease. This government intends to meet the terms of that lease in full.”

This reflected the natural conservation instinct of the Conservatives. Contrast this with the reckless attitudes of modern corporations and media commentators towards our planet. We have become the worst of tenants, leaving a mess for future generations.

At the aforementioned Royal Society speech, she made an urge for investment saying it was “money well and necessarily spent, because the health of the economy and the health of our environment are totally dependent upon each other.”

She went on: “It is possible that with all these enormous changes (population, agricultural, use of fossil fuels) concentrated into such a short period of time, we have unwittingly begun a massive experiment with the system of this planet itself.”

By 1989, she told the Conservative Party, “The way we generate energy; the way we use land; the way industry uses natural resources and disposes of waste; the way our populations multiply – those things, taken together are new in the experience of the Earth […] It is no good proposing that we go back to some simple village life and halve our population by some means which have not been revealed, as if that would solve all our problems.”

She also called for urgency in a 1990 speech to the Aspen Institute: “The costs of doing nothing, of a policy of wait and see, would be much higher than those of taking preventive action now to stop the damage getting worse.”

Also in 1990, at the second Climate Change Conference, she spelled out her concerns eloquently:

“For two centuries, since the Age of the Enlightenment, we assumed that whatever the advance of science, whatever the economic development, whatever the increase in human numbers, the world would go on much the same. That was progress. And that was what we wanted.

“Now we know that this is no longer true.

“We have become more and more aware of the growing imbalance between our species and other species, between population and resources, between humankind and the natural order of which we are part.

“In recent years, we have been playing with the conditions of the life we know on the surface of our planet. We have cared too little for our seas, our forests and our land. We have treated the air and the oceans like a dustbin. We have come to realise that man’s activities and numbers threaten to upset the biological balance which we have taken for granted and on which human life depends.”

Sadly, by the beginning of the new century her faculties and her enthusiasm for climate science had begun to wane.

In 2002, she dedicated 10 pages of her last book, Statecraft, to what she called “hot air and global warming”. She said, “Whatever international action we agree upon to deal with environmental problems, we must enable our economies to grow and develop, because without growth you cannot generate the wealth required to pay for the protection of the environment.”

Recently, there have been attempts to co-opt the elderly and frail Thatcher to the climate sceptic cause. Taking advantage of her dislike of state intervention, it seems she was persuaded that the economy and environment were in conflict rather than totally dependent on each other.

The journalist,  Christopher Brooker (BA History), advocate of the harmlessness of asbestos, passive smoking and BSE, and a rejecter of the concept of evolution, wrote in the Daily Telegraph that she had been an early adopter of the climate sceptic’s cause. This is nonsense; a misrepresentation; and is insulting to Thatcher’s obviously deeply held beliefs concerning the environment.

Her grasp of the environmental impact of unregulated pollution reflected the views of her economic soulmate, Friedrich Hayek. Sadly, she did not maintain that grasp of that truth in her later years. The unleashing of unfettered financial capitalism, reckless corporations and rampant consumerism may have undone many of her wiser words on the balance between ecology and economy. She would probably have disapproved.

The right to buy, unemployment as a necessary cost for growth, winning the Falklands War, beating the miners, waves of privatisation, surge in private enterprise, financial deregulation, surviving the Brighton bombing, subsequent economic boom and bust, the end of the Cold War, and introducing the poll tax, all mark her radical and controversial tenure as Britain’s first female prime minister.

Thatcher divides opinion, but the view of Hugh Prather (writer, minister, and counsellor) on feedback is apposite: “Negative feedback is better that none. I would rather have a man hate me than overlook me. As long as he hates me I make a difference.”

In a speech in 1987 she said, “I think I have become a bit of an institution – you know the sort of thing people expect to see around the place.”

No more. Whatever people think of her politics and legacy, and people connected with Blue & Green Tomorrow have strong opinions, our thoughts are with her family.