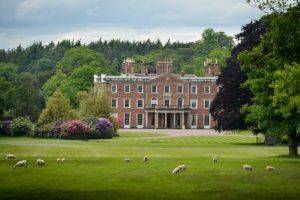 2016 marks the 300th anniversary of 18th century landscape architect Lancelot ‘Capability’ Brown, whose birthday (probably) falls this August. His actual date of birth is not known but he was baptised on 30 August 1716 at a time when babies were baptised very soon after birth, so we have declared August as his Birthday Month! The nationwide Capability Brown Festival celebrates the life, work and legacy of England’s most famous gardener, often dubbed the ‘Shakespeare of gardening’ or the ‘grandfather of landscape architecture’.

This year the Capability Brown Festival has, and continues to see, a myriad of events including exhibitions, guided walks, musical and theatrical performances and family friendly events held at many of his landscapes across England and Wales. This August, to celebrate Brown’s birthday month there are even more celebratory events taking place. Here are a few as a taster:

Wimpole, Cambridgeshire (cared for by the National Trust)

Join the 300th anniversary celebrations at Wimpole with a Capabili-Tea tent, a Georgian cricket match and performances by theatrical and dance groups

A whole host of family friendly activities including crafts, games, pony carriage rides and even an appearance by Mr Brown himself! Events will climax with a traditional church fete at St Wilfred’s Church, where Brown was baptised in 1716

Picnic with the past at Gatton Park

Enjoy a family picnic with characters in Georgian costume – dress up and bring your own picnic, or alternatively light refreshments and a children’s dressing up corner are available

Croome D’Abitot, Croome, Worcestershire (cared for by the National Trust)

Listen out for the church bells of St Mary Magdalene (built by Brown) on Brown’s baptism day, between 10:30-13:30

Brown is associated with more than 250 landscapes across England and Wales, including the well-known estates of Blenheim Palace (Oxfordshire), Highclere Castle (Berkshire, the fictional home of Downton Abbey) and Chatsworth (Derbyshire) to hidden gems such as Compton Verney (Warwickshire) and Sherborne Castle and Milton Abbey (Dorset). Brown’s client list included one King, six Prime Ministers and half of the House of Lords. Though despite his impressive client list, reputation and worldwide influence, Brown was also a man of mystery: his exact date of his birth is unknown, though there are records showing he was baptised at St Wilfred’s Church in Kirkharle, Northumberland, on 30th August 1716.

Ceryl Evans, Director of the Capability Brown Festival says: “Brown’s portfolio is impressive – we see examples of his influence from Dinefwr in Carmarthenshire to Chilham Castle in Kent, which back in the 18th century wouldn’t have been easy to manage, whether in terms of the geographical spread of his client portfolio, or the practical difficulties of travelling around the country! Brown was not just a landscape architect; he was an engineer, entrepreneur, salesman and an extremely effective businessman too. It was the combination of these skills which led to his success across England and Wales, and what better time to celebrate his accomplishments than in his birthday month.”

Ceryl Evans concludes: “There are many ways in which the Capability Brown Festival will celebrate life and legacy of Capability Brown during his birthday month, and throughout August we look forward to seeing visitors enjoying, exploring and engaging with his life’s work and admiring his many impressive landscapes that are still so prominent in the English countryside today.”

For further details of events taking place this summer for the Capability Brown Festival 2016, or to find a Brown landscape near you, visit: www.capabilitybrown.org