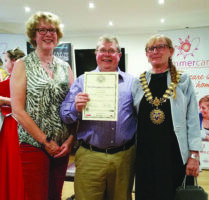 ‘Good Business Week’ For Businesses In Southend And Castle Point

An increasing number of companies are beginning to realise the benefits of supporting their local communities. In one week alone, numerous companies in Southend and Castle Point demonstrated what being a ‘good business’ really means.

The week started with Canvey Island based business Design 4 Print being awarded a Silver Castle Point Business and Community Charter Award. Design 4 Print supports many local charities and community groups by supplying services free of charge or at greatly reduced prices. Additionally, getting involved in football-based projects that help promote youth activities forms the core strategy of the company’s community engagement. All directors and employees get involved in supporting the Canvey Island Youth Football Club and Canvey Island Football Club (CIFC): this includes looking after the financial records of the youth FC, organising and participating in events which include fun days and fundraising events for local charities such as The Danny Green Fund and the Indee Rose Trust, and helping CIFC obtain grants and funds for further development.

Design 4 Print is the first company to receive a Castle Point Business and Community Charter Award, a robust award that acknowledges and celebrates businesses that support the local community. The directors were presented with a certificate by The Mayor, Councillor Steven Cole. Cllr Cole was also given a tour of the premises and was very impressed with the company and in particularly the huge investment in start of the art technology.

The same evening, Jardine Motors sponsored a Double Whammy Networking event at their Lancaster Toyota Rayleigh dealership at the Rayleigh Weir. Double Whammy events are business networking events that also raise funds for local good causes. Because the events are sponsored, at least 80% of the ticket money goes to the ‘charity pot.’ This event raised £271 which was divided equally between Whizz Kids for their Southend Ambassadors Club and Little Havens Hospice. One of the delegates was also delighted to win the card draw and the opportunity to drive a brand new Toyota for a weekend.

A week later, a Southend based business was hosting the launch of Southend Carnival 2016 – and was delighted to be presented with a Gold Southend Business and Community Charter Award at the end of the event.

Garry and Penny Lowen, owners of the Gleneagles Guest House in Clifftown Road, Southend are well known for the fabulous work they do in the local community. Garry is Chair of both the Southend Carnival Committee and Chair of the Mayor’s Charity and both Garry and Penny proactively get involved in many events throughout the year.

The Southend Charter Committee had recently confirmed a Gold Charter Award for the Gleneagles Guest House and the carnival launch event held in their lovely tea rooms seemed a most appropriate occasion to present the award. Attendees at the event, which included representatives from local businesses that sponsor the carnival, cheered enthusiastically when the certificate was presented by the Mayor of Southend, Councillor Judith McMahon. Cllr McMahon said she was delighted to present the very well deserved certificate and stressed how important it is for businesses to follow Garry and Penny’s lead by supporting the local community.

Businesses in Southend or Castle Point can find out more about Charter Awards and Double Whammy Networking by contacting Jill Poet: jill@orbuk.org.