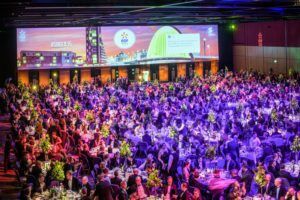 Almost 50 finalists for the 2016 Scottish Green Energy Awards have been announced – including Glasgow Science Centre and an unprecedented three community hydropower projects.

Companies including SgurrEnergy, Savills and Diageo are also shortlisted for the prestigious awards, which will be hosted by comedian Miles Jupp and presented in front of 1,000 guests in Edinburgh on December 1.

Glasgow Science Centre’s Powering the Future exhibition which highlighted the role renewables can play in our energy mix, is a finalist in the Champion of Renewables category.

Three hydro projects developed by communities in the Cairngorms, Loch Lomond and the Trossachs National Parks and near the centre of Aberdeen are also shortlisted.

Niall Stuart, Chief Executive of Scottish Renewables, told how the awards “represent the huge variety of the sector”.

He said: “Once again the Scottish Green Energy Awards shortlist shines a light on the most innovative, forward-thinking and sustainable projects, organisations and individuals in our industry.

“There have been some important projects delivered over the last 12 months and the shortlist shows clearly how our sector is helping grow the economy, tackle climate change and support communities across the country.”

The Scottish Green Energy Awards ceremony will be held at the Edinburgh International Conference Centre on Thursday December 1, and is sponsored by EDF Energy Renewables.

The shortlist for the Scottish Green Energy Awards is really impressive once again, and it is clear we have very high calibre finalists for 2016.

“It is great to see the renewables industry is home to so many passionate and talented people. We are very proud to once again support the Scottish Green Energy Awards, and are looking forward to finding out who the winners are in December.”