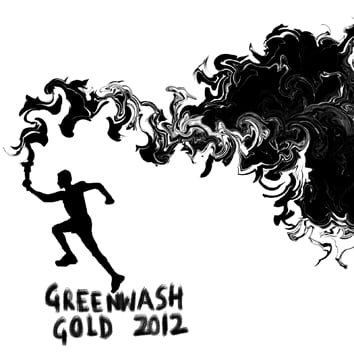 BP, Dow Chemical and Rio Tinto are all major sponsors at this summer’s London Olympics. But with a history of unethical and unsustainable behaviour behind them, a new campaign aims to highlight the ill-conceived involvement of the trio in the so-called “greenest ever games”.

Greenwash Gold 2012 has been set up by the London Mining Network, the Bhopal Medical Appeal and the UK Tar Sands Network, and allows users to vote for which of the three companies they think deserves the “dishonour” of receiving the Greenwash Gold Medal.

This is an award that, according to the campaign’s website, should go to the organisation that “is covering up the most environmental destruction and devastating the most communities while pretending to be a good corporate citizen by sponsoring the Olympic Games”.

Since the announcement of the three as official sponsors, The London Organising Committee of the Olympic and Paralympic Games (LOCOG) has been placed firmly under the spotlight, especially after Lord Coe’s initial claims that the 2012 event would be the “greenest ever games”.

Oil giant BP is the event’s sustainability partner – a controversial title that in February forced a group of high-profile protestors to write a letter to LOCOG and the International Olympic Committee (IOC) stating their severe objection.

“The idea that BP is a suitable sustainability partner for the London Olympics beggars belief”, Jess Worth, co-founder of the UK Tar Sands Network told Blue & Green Tomorrow at the time.

“Whoever okayed this decision clearly has no understanding of what ‘sustainability’ means”.

Dow Chemical’s involvement is another contentious topic. The organisation owns Union Carbride – the gas company responsible for the 1984 Bhopal gas disaster in India, which has, to date, killed 25,000 people.

Meanwhile, mining firm Rio Tinto is supplying the metal for the Olympic medals. This metal is allegedly sourced from the company’s mines in USA and Mongolia, both of which produce deadly air pollution and threaten water resources, according to greenwashgold.org.

Meredith Alexander, chair of the Greenwash Gold campaign and former member of the Commission for a Sustainable London 2012, said, “There is an expensive machine behind the Games that is funded by corporate sponsors.

“Sadly when these sponsors are selected, money talks much more loudly than values.

“As an ex-member of the Commission for a Sustainable London 2012, I know first-hand just how little scrutiny is allowed when sponsors are chosen.

“Greenwash Gold 2012 is a chance to turn this around by letting the public vote for the least ethical sponsor.”

Video animations have been made to highlight the reasons behind each of the three organisations’ unsuitability for Olympic sponsorship. Members of the public are invited to vote for which of the three they think deserves to take home the unenviable accolades, with bronze, silver and gold medals to be awarded.

Here, laying down the case for each of the unwitting competitors, are the three videos.

To vote, visit the campaign’s website. The announcement of the winner (or, more likely, loser) will coincide with the Games taking place in July.

BP’s role as sustainability partner at London 2012 might simply be a greenwash cloak, but there are plenty of other organisations that truly focus on sustainable business practices and work towards positive objectives in their respective fields.

Supporting companies that should form the cornerstones of a newly enlightened and sustainable economy through investment is one way you can make a difference. Firstly, understanding where your money is invested and then realising you must take action is the basis of sustainable investment.

Our recent report, The Guide to Sustainable Investment, includes a great deal of information and a number of interviews with industry experts to give you a head start.

We also encourage you to engage with specialists in the field. Fill in our online form and we’ll connect you to an adviser.