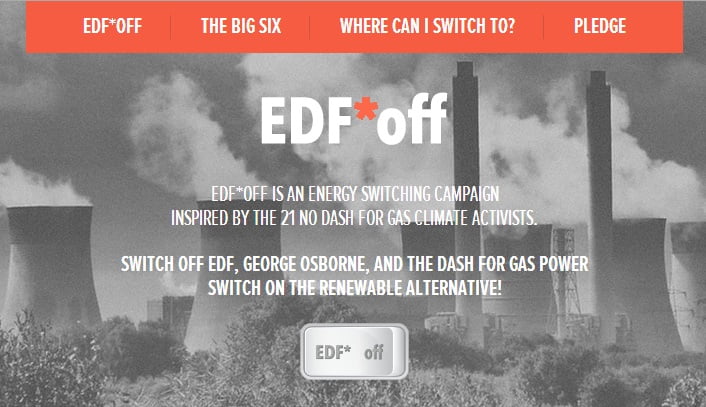 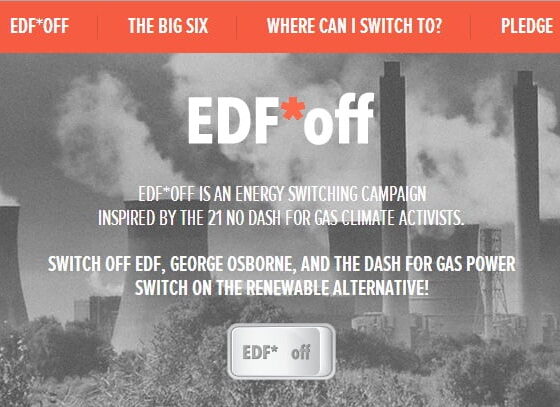 No Dash for Gas tells EDF customers to ‘EDF*off’

A provocative website encouraging EDF customers to switch from the big six suppliers has been launched in an effort to help fight campaign group No Dash for Gas’ corner.

EDF levelled a £5m civil claim against the activists last month, after 21 of them occupied one of its power plants in October, halting operations for a week.

EDF is seeking compensation for loss of profits, and if successful on March 20, campaigners that pleaded guilty to trespass face bankruptcy, homelessness and possible jail sentences.

A petition set up on Change.org two weeks ago to get EDF to drop all charges has so far received more than 63,000 signatures, including from evolutionary biologist Richard Dawkins and Xena: Warrior Princess star Lucy Lawless.

Promoted via social networking, a group in support of the No Dash for Gas campaigners has launched a website called EDF*off that lays out a list of reasons why EDF customers should support the campaign and switch over to energy suppliers that are more focused on providing cleaner energy such as Good Energy.

One of the case defendants, Danny Chivers – an environmental researcher and author – expressed how EDF causes at least £5m damage to the climate on a daily basis in a blog post: “Even if the company’s £5m claim against us had any basis in reality, it would be cancelled out many times over by the very real damage they’re doing to the whole of society.”

“Now, if only we had £1.7 billion per year like EDF Energy, we could afford to launch a counter-claim against them for the damage that they’re doing to the world. Then maybe we could call up Nottinghamshire Police and ask them to serve the claim on EDF for us.”

Hundreds of EDF users have supported the new website via Facebook and Twitter, confirming that EDF’s civil claim has pushed them to switch to a more ethical energy provider.

If you want to help oppose the lawsuit, join the thousands of people who have signed the petition to tell EDF to drop all charges, and switch your supplier to a greener company more deserving of your money.