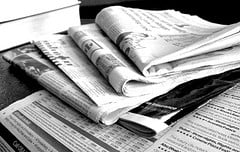 April has been a busy month from sustainable news perspective. Blue & Green Tomorrow takes a look some of the biggest stories and examines how other news outlets tackled them.

The information was derived from research conducted by The Pew Charitable Trusts, in a report called Who’s Winning the Clean Energy Race?.

The Guardian also covered the news (Renewable energy investment bounces back after 2010 slump), and also wrote a further, less positive article about the fact that investment in clean technology hadn’t had the best of starts to 2012 (Clean energy investment stalls in Q1).

The BBC opted for a broader outlook into the news, and instead focused on the fact that the US had invested the most into renewables (US tops global clean energy investment rankings).

Another issue that was raised in April was that of fracking, the action of inserting a solution into shale rock, which causes them to fracture (hence, fracking) and access the gas within.

The Independent (Fracking for gas allowed in UK despite earthquakes) and The Guardian (Gas ‘fracking’ gets green light) went down similar routes, whilst the BBC’s Richard Black examined the issue in more detail (Fracking ‘should continue with checks’).

The Guardian’s Robert Newman also wrote a piece called This is the fracking truth, although we feel frack-based puns may have had their day.

The third big story that emerged last month was the hysteria surrounding the Clean Energy Ministerial—an event that planted 23 energy ministers from some of the world’s biggest economies in a room to discuss green plans.

This year’s edition was held in London, and David Cameron was expected to deliver his first keynote environmental speech as Prime Minister.

However, as B&GT reported, he decided to reduce this address to mere “remarks” just two days before he was due to speak (Cameron’s cowardly decision to cut keynote environmental speech).

Energy secretary Ed Davey instead stepped into the breach and challenged the UK to increase its use of renewable energy (Ed Davey’s clean energy investment challenge).

The Guardian’s Damian Carrington called the Prime Minister’s speech reduction an “utter betrayal” (David Cameron downgrading of ‘keynote green speech’ to ‘remarks’ is an utter betrayal), and questioned whether this government really was the “greenest ever” (The greenest government ever – or never?).

The Telegraph took a less forceful stance on the Prime Minister’s contribution, through a more positively-angled story on his commitment to wind technology (David Cameron commits to wind farms), but WWF-UK chief executive David Nussbaum summarised the majority view in the Huffington Post, asking Where is Cameron on the environment?.

So, that’s April in a nutshell. Though Cameron’s Clean Energy Ministerial circus at the back end of the month was a little disheartening, it doesn’t change the fact that governments are discussing the issues. The many positive announcements in the sustainability space as reported by B&GT this month far outshine any negativity.