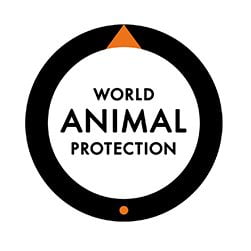 A new report suggests Britain’s cows are being held in cruel conditions. World Animal Protection UK have found that more and more intensive indoor dairy farms are being set up across the UK. What’s more, they say the farms are misleading to consumers who don’t realise where their milk is coming from.

British consumers are unaware of the stealth introduction of intensive indoor dairy farms, shows a report published today by World Animal Protection UK. Tactics by developers include increasing farm sizes gradually and ‘retrospectively’ applying for planning permission, which makes it difficult for local planning authorities to consider the full impact on communities.

Although no official figures exist, the research has found nearly 100 confirmed intensive indoor dairy farms with a further 43 suspected. These systems can hold over 2,000 cows and now account for up to a fifth of the milk produced in the UK. Cows in these systems never go outside, are pushed to their limits to produce more milk, and are at a higher risk of suffering from lameness and udder infections.

Alyx Elliott, UK Head of Campaigns at World Animal Protection said: “We believe that the British public will be shocked about the number of intensive indoor dairy farms in the UK, especially when these systems put cows at an increased health risk and prevent them from expressing their natural behaviour. This century, countries such as Denmark have seen the majority of their cows moved to indoor intensive farms, without anyone noticing, and we do not want this to happen to us.

“The UK is the world’s 10th biggest milk producer but many farmers are selling milk at less than the cost of production. People are willing to pay more for free range milk – and they are already familiar with the ‘free-range’ concept – so this provides a fantastic opportunity for the dairy industry to create value in the milk we are producing. It means providing better labelling and replicating the great work pasture based dairy farmers are doing already.”

A recent YouGov poll showed that 87 per cent of respondents would want to buy free range milk from cows that grazed on pasture, which would require more transparency about where British milk comes from.

Andrew Ayrton, pasture based dairy farmer in Skipton, Yorkshire said: “Very few people are aware of intensive indoor dairy farming, and most believe that all cows go out to graze on grass. This way of farming causes lameness and health problems associated with standing in slurry all year. To go outdoors is a basic freedom that every cow should have.”

Free range milk is already being produced in the UK on a small scale, providing a model that could easily be expanded across the country. A recent World Animal Protection study found that there is no reason why it can’t be made widely available and a brand introduced with a minimum of 20,000 litres of milk supplying around 40 stores.