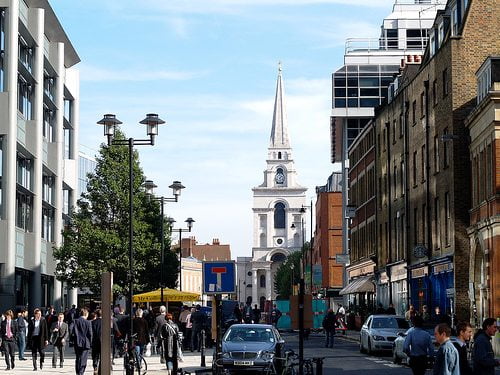 It was a mild winter’s day as I stepped out of Bethnal Green tube to head to Oval Space and TEDxEastEnd. Volunteers with Red umbrellas and signs marked the route to the event, now in its third year.

The theme was Society Beyond Borders, timely given the fevered debate about immigration. Why were we there? Sustainability is about matching the needs of the economy, environment and society. It was that final area that piqued our interest. TEDx events are independently organised TED events, the technology, entertainment and design-fest beloved by so many. TED is a non-profit organisation devoted to ideas worth spreading.

Maryam Pasha (the curator), of the Migrants’ Rights Network, and Mike Mompi, of impact angel investors ClearlySo, were the masters of ceremony. The event was held at Oval Space, in London’s increasingly cool East End, and my old stomping ground (when it wasn’t so cool). It’s a warehouse-style venue that comfortably housed the 450 people who were there to listen to thought leaders about the varied perspectives on borders. There’s a nice industrial feel with massive gas holders as a backdrop.

The BBC’s Home Editor Mark Easton kicked off proceedings with a light-hearted exploration of identity. As a child we often describe ourselves as being from a street, a country (Scotland in Easton’s case), Britain, Europe, the world, the galaxy and the universe. 2014 is the year for deciding on whether we are European and for the Scottish, whether they are British. Easton explored how we define where we are from and touched on exclusive identities and inclusive identities and the contradictions between them.

Mitu Khandaker gave a fascinating insight on the games’ industries endemic racism and sexism and punctured the myths of tidy quick-win solutions of representation and criticism. Her untidy solution was that we need to take tiny steps towards what will inevitably be a messy solution. She is tackling this through her game Redshirts, a reference to the stock characters in fiction who die soon after being introduced, with its origin in the unfortunate sounds of Star Trek.

Stephanie Pau extolled the virtues of citizen invention, specifically citizen space exploration. In a society without borders, space is the final frontier.

The inspirational Laura Bates talked about the daily abuse of women that led her to create the Everyday Sexism Project. A hushed hall heard the horrifying abuse women suffer in their daily lives. Her eloquent impassioned argument showed how this diminishes us all, from young girls who report their fear on her website and men who are ridiculed for wanting to take paternity leave. An economic, political and cultural system designed around employed, white, heterosexual, able-bodied men, needs radical reform.

Sugata Mitra had a TED wish. He demonstrated that children’s natural curiosity means they can learn without being taught. His hole in the wall project and subsequent SOLE and Granny Cloud projects are well worth watching at TED.com.

Lisa Ma socialises activism and gave a slightly surreal speech about the virtues of quiet activism.

Hamit Dardagan, of Iraq Body Count, explored the belligerent developed world’s unwillingness to count the innocent killed in our wars, and how his organisation filled that void.

The scientist Brooke Magnanti, better known as Belle de Jour, gave a determined defence of the world’s most successful author, anonymous. Her compelling argument asked who benefits from abandoning anonymity (the corporate media and politicians trying to silence dissent), and how countless women and dissidents have used anonymity to get their words across. Trolling is often thrown together with the word anonymous, and this is misleading, as most Trolls are not anonymous. They abuse and bully under their real names. Behaviour, that in any other walk of life would lead to a collar being felt and the stern punishment of a magistrate.

Leandro Herrero, a fusion of professor, teacher and boss, gave a counter-intuitive and amusing talk about the importance of personal borders. In the digital age we live our lives in their glare of total exposure and disclosure, diminishing our personal stock. Holding something back, being undiscoverable, enjoying silence and your own company were part of his borders diet.

Peter Tatchell is a formidable human rights campaigner who has done much for LGBT rights in the UK and around the world. In his speech he gave an impassioned speech for economic reform that we will try and publish in full over the coming weeks. His argument is that poverty is a human rights issue and economics has done more to create the current inequity.

Martin Wright, of Forum for the Future, argued the case for a new environmentalism, which doesn’t tell people off or make them feel guilty. He used his experiences in Bangladesh to show how the developing world can leapfrog the capital intensive infrastructure. They can use mobile phones and renewables to increase their prosperity, from the fisherman phoning from offshore to get the best price for their fish, to replacing dirty lamps and cookers with cheap, clean energy.

Mica Nava is the emeritus professor of cultural studies at the University of East London. Her carefully constructed argument showed the negativity that frames our discussion about immigration. Exploring the inadequacy of terms such as multiculturalism, superdiversity and cosmopolitanism she explained how the slightly uncomfortable term of mongrelisation better explains London’s gradually merging racial profile. Her talk was one of optimism for the future, built on her own family’s incredibly global heritage.

The award-winning slam poets, The Chill Pill Poets (Raymond Antrobus, Deanna Rodger and Adam Kammering), brought down the house with poems about difference. In a case of perfect symmetry with Easton’s opening remarks, the event ended with Deanna Rodger performing a moving poem on how she is asked, “where are you from?”

The content will be released as individual talks in February and you can get updates here.