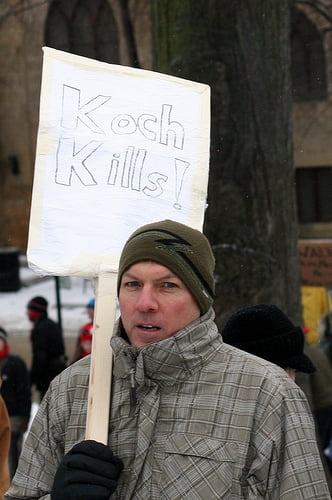 An investigation by The Independent has revealed details of a “secretive funding organisation” that allows the super-rich to anonymously fund the rejection of climate science.

It’s said that The Donors Trust and Donors Capital Fund are “funnelling millions of dollars” – granted to them by unnamed billionaires – into climate denial activities.

An audit trail claims to oust Charles Koch, owner of fossil fuels firm Koch Industries, as one of the most high-profile and prolific backers, though details of others are as yet unknown.

Robert Brulle, a sociologist at Drexel University in Philadelphia, told The Independent, “We really have anonymous giving and unaccountable power being exercised here in the creation of the climate countermovement. There is no attribution, no responsibility for the actions of these foundations to the public.

“By becoming anonymous, they remove a political target. They can plausibly claim that they are not giving to these organisations, and there is no way to prove otherwise.”

In the UK, the financial affairs of the climate sceptic thinktank The Global Warming Policy Foundation (GWPF) were put under the microscope last year after an investigation by Brendan Montague, director of the Request Initiative.

GWPF chair Lord Lawson denied Montague access to this information and after elevating the issue at an information rights tribunal, a judge deemed the thinktank not “influential” enough to be forced to disclose the requested details.