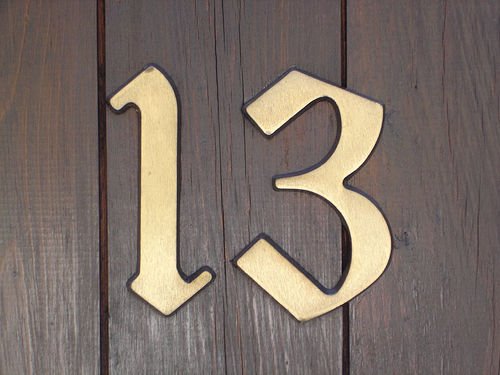 Friggatriskaidekaphobia: The fear of Friday the 13th. Once you’ve untied your tongue, it sounds like nonsense – can someone really fear a date? Taking a break from ethical investment and sustainability, Alex Blackburne writes how people do harbour this fear, but that it’s all garbage.

Happy Friday the 13th! What an odd expression. Wishing someone well on one specific, but insignificant day out of the 365 available seems silly. But then equally, so does fearing it.

Friggatriskaidekaphobia: the fear of Friday the 13th. Once you’ve untied your tongue (it admittedly sound like nonsense), can someone really fear a date? Taking a break from sustainable investing and living, we question why people harbour a fear of this particular date, and discover its popular use is more recent than you might think.

The fear of Friday the 13th, also known as paraskevidekatriaphobia (a fear so irrational we had to name it twice) is, rears its head two or three times a year.

On each of these occurrences, the friggatriskaidekaphobe (or paraskevidekatriaphobe) inside us – whether skeptical or not  – struggles to break free of the cage of our consciousness.

Some manage to suppress these thoughts and just get on with their life, but for many, arguably the majority, Friday the 13th marks an eerie 24 hours that’s surrounded by bad luck and perhaps witchcraft and sorcery, too.

But where did this mind-set come from?  Why is it that on this particular day, stock markets see an often significant lull, plane journeys decrease, and the number of absentees at work goes up?

The real origins of the phobia barely even break the 100-year barrier. In 1907, controversial US businessman, Thomas Lawson, wrote a book entitled Friday the 13th. In it, he depicted a Wall Street crash. That possibly explains a stock market lull.

The notion of fearing the date didn’t enter the mainstream radar until, would you believe it, the ‘80s. Yes, that’s right, the hockey-mask cladded, chainsaw-bearing, psychopathic murderer; Jason Voorhees, gave widespread publicity to the phobia in the Friday the 13th films.

“Fridays will never be the same again”, the movie’s poster chillingly warned. And they weren’t. Well, at least the ones on the 13th of the month…

We’ll find out for sure in 2029 whether or not this Friday the 13th conundrum is legitimate, though. An asteroid – the 99942 Apophis – is set to make a ‘close’ encounter with Earth on that date.

The sceptics might not be laughing in 17 years’ time, but we suspect that even NASA can’t resist the chance to grab the headlines.

More seriously, a reputable 1993 study conducted by the British Medical Journal sought “the relation between health, behaviour, and superstition surrounding Friday 13th in the United Kingdom”.

The study focused on drivers, shoppers and residents on two dates, Friday the 13th and Friday the 6th. Comparing numbers of vehicles on motorways, numbers of shoppers in supermarkets, and hospital admissions due to accidents, the study came to the conclusion that shopping was fine (we recommend the ethical kind that supports Fairtrade).

However, the report concluded “Friday 13th is unlucky for some. The risk of hospital admission as a result of a transport accidents may be increased by as much as 52%”. As always, we recommend walking wherever possible. It’s good for the environment, good for your health and good for the soul.

Now, we’ll get back to writing about how you should invest your money sustainably.