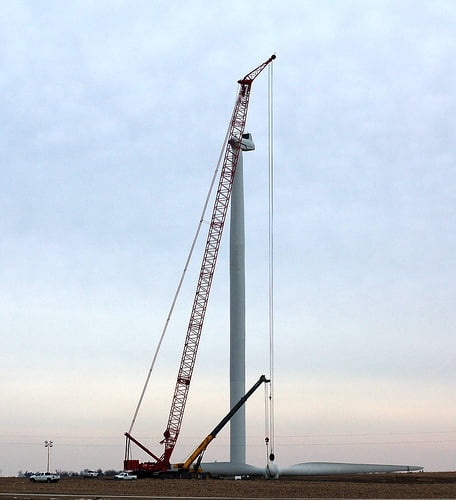 In 2010/11, the renewable energy industry supported 110,000 jobs in the UK, according to a new report by the Renewable Energy Association (REA).

Renewable Energy: Made in Britain examines employment and turnover in the sector, and was launched today by energy minister Greg Barker.

The report, which was co-written by low-carbon experts Innovas, says that the 110,000 jobs currently supported by the renewables industry could rise to as much as 400,000 by 2020.

The European Commission announced in February that a million people were employed in the green energy sector across the EU in 2010 – a figure to which the UK contributed 31,000.

But the new stats from REA and Innovas show that green jobs have made a giant leap, trebling in the year since.

The recent exponential growth of the solar and wind industries has meant that the need for jobs in the UK renewables sector has been greater than ever before.

“Harnessing our renewables creates employment and means that rather than spending money on energy imports we can keep it circulating in the UK economy”, said REA chief executive Gaynor Hartnell, upon the launch of the report.

“Government needs to take steps to build the skills base and keep the UK on track to meet its renewables targets.

“When it comes to the employment, economic and energy challenges we face, the answer is clear – make it renewable and make it in Britain.”

The report also looks at the economics of renewable energy, with the sector’s market value increasing by 11% between 2009/10 and 2010/11—a statistic that has shattered the economic growth of industry in the same period, a mere 1.4%.

REA and Innovas lay out “nine recommendations for Government” in the report to maximise the potential of the renewables sector.

These include going bolder and broader with clean power, instilling confidence in the sector and empowering people, communities and organisations to act.

Greg Barker, minister of state for climate change, said, “Renewable energy not only provides us with clean and secure energy that cuts our reliance on imported fossil fuels—it generates billions of pounds of investment and potentially hundreds and thousands of jobs and is a key growth sector for the UK economy.

“The REA’s report sets out plainly the opportunities and challenges in this area. We are determined to seize the momentum and secure maximum benefit for the UK.”

As with our own report—The Rise of Renewable Energy— REA and Innovas’ study highlights the dual value of the renewables industry: a cleaner economy and a boost to British jobs.

The financial positivity is further buttressed by the national savings predicted following increased approval of renewables. REA says that some £60 billion will be saved cumulatively between now and 2020, peaking at £11 billion in 2020 alone.

Increasing the use of clean power will ultimately mean that more money can be reinvested in green technology and green enterprise, as opposed to dirty fossil fuels.

By supporting companies like Good Energy—the UK’s only 100% renewable electricity supplier—individuals and communities can play their part in shifting to a greener economy.