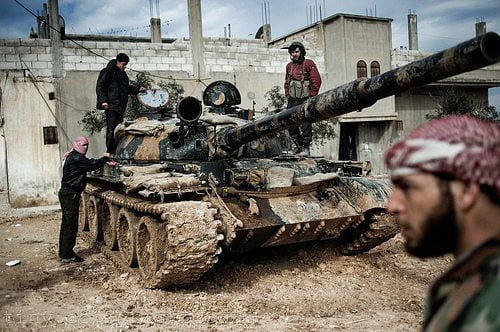 Resource scarcity affected partly by global warming may be an underlying cause of conflicts such as the Syrian civil war, say researchers from Anglia Ruskin University.

As world leaders debate the appropriate course of action to confront the Syrian crisis, the death toll has exceeded 100,000, while over 2 million have fled the country.

The Global Sustainability Institute at Anglia Ruskin University is investigating the possible triggers of social unrest through its Global Resource Observatory (GRO).

Dr Aled Jones, director of the Global Sustainability Institute, said, “Under closer examination the events in Syria appear to stem from far more complex set of pressures, beyond religious tension and government brutality, with its roots in the availability of a natural resource – water.

“This is worrying as decreasing water availability is far from a localised issue, it is a systemic risk across the Middle East and North Africa that is likely to be further exacerbated by climate change.”

Syria, like many surrounding nations, has experienced significant water shortages since 2003, caused by population pressures, poor water management and drought.

Between 2006 and 2009, Syria increased its annual imports of wheat by around 1.5 million tonnes.  This equated to more than a 10-fold increase in the cost of importing one of the most basic foods.

In response, small groups of individuals protested. The researchers claim that the government reaction to these protests, combined with existing social tensions and instability, quickly escalated into the civil war currently tearing the country apart.

Peter Dawe, of the Dawe Charitable Foundation, which is funding the research, argues that trends in global resource usage need to be better understood to avoid the creation of ‘self-reinforcing conflicts’.

He explained, “You can conceptualise some of the factors that led to the Syrian crisis as a complex and dynamic feedback loop: the desire of the United States to decrease their reliance on international oil markets by increasing their production of biofuel has been convincingly linked to rising global food prices.

“This, combined with a decrease in local food availability – driven in part by climate change, which is caused by the use of fossil fuels such as oil – led to the protests in Syria.  The resulting civil war has in turn caused an increase in the price of oil on international markets.”

Why Russia supports Syria. In a word, Tartus.