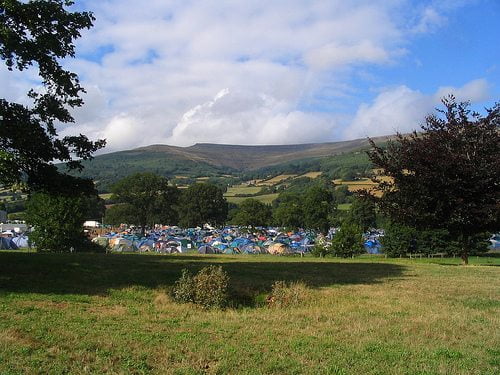 With the UK’s summer festival season almost upon us, we will be looking in-depth at some of the most sustainable or eco-friendly events taking place in 2014.

But first, to whet your appetite, here is a mini-guide to the festivals we think you should look out for this year, glancing briefly at their sustainability and green commitments.

A small family festival of music and nature, situated in Braziers Park, Ipsden. It was first held in 2008 and is run by the same people who organise the Truck Festival.

When: May 16-18
Tickets: Adult weekend tickets are £75; day tickets between £24-32
Website: www.woodfestival.com
Sustainability: The festival is 100% powered by renewable energy, with energy sources ranging from biodiesel to solar power. Organisers have invested in sustainable infrastructure, including the main green oak stage, with Julie’s Bicycle describing the event as a “beacon of environmental sustainability“. It has plans to become a zero-waste festival in the future, and it already promotes the use of public transport schemes, especially cycling and car sharing, for people travelling to the event. It is highly commended by A Greener Festival and was handed a silver award by Festival Kidz.

A Sussex-based opera festival, founded in 1934, that presents a range of opera productions each year.

When: May 17 – August 24
Tickets: From £85
Website: www.glyndebourne.com
Sustainability: Glyndebourne uses a wind turbine as its main source of power. In its second year of operation (to January 2014), the turbine exceeded its targets, generating enough energy to cover 102% of the event’s requirements. The festival was awarded the maximum three stars by the environmental certification scheme Industry Green in 2013, and it has an ambition for its whole operation to be carbon neutral.

An ethical living arts and music festival that originally began back in 2006.

When: May 29 – June 1
Tickets: Adult tickets are £99; family tickets are £225
Website: www.sunrisecelebration.com
Sustainability: All the energy used at the festival site is from renewable sources such as solar and wind power. On-site biodiesel also is used, locally sourced and made from waste vegetable oil. Sunrise’s goal is to achieve best practice in ethics and the environment, and it was rated outstanding by A Greener Festival in 2013.

A Celtic music festival that takes place in Stornoway in the Scottish Outer Hebrides.

When: July 16-19
Tickets: Adult weekend tickets are £79; day tickets range from £26-35
Website: www.hebceltfest.com
Sustainability: The trust behind the festival has committed to minimising its impact on the environment, reducing carbon emissions and waste on site, encouraging more responsible forms of transport, and sustainably managing festival resources like energy and water consumption. In 2013, it was one of the first festivals to trial the Recycle and Reward scheme – to incentivise festival-goers to recycle. A Greener Festival rated it outstanding in 2013.

An annual music and arts festival set in the picturesque grounds of Larmer Tree Gardens.

When: July 16-20
Tickets: Adult tickets start at £160; youths at £105 and children at £60
Website: www.larmertreefestival.co.uk
Sustainability: The festival works with organisations such as Wiltshire Event Services to improve recycling initiatives during the five-day event. It encourages the use of public transport to and from the site, and supports the local economy by utilising local suppliers as often as it can. In 2014, the festival’s official charity partner is the food poverty charity the Trussell Trust. A Greener Festival commended its efforts in 2013, and it was given a gold award by Festival Kidz in the same year.

One of the most popular folk festivals in Europe, running since 1964, the event takes place on the impressive grounds of Cherry Hinton Hall.

When: July 31 – August 3
Tickets: Adult weekend tickets are £144; day tickets from £53.50-63.50
Website: www.cambridgefolkfestival.co.uk
Sustainability: A 2009 report, commissioned to measure the carbon footprint of the festival, found that 42% of staff walked, cycled or used public transport to get to the event. In 2010, the festival saw a recycling rate of 71% for all waste, and its bars generate minimal or zero landfill waste. It also has strong links with the environmental charity Friends of the Earth, and was highly commended by A Greener Festival in 2013.

When: August 14-17
Tickets: Adult weekend tickets are £159
Website: www.greenman.net
Sustainability: The event uses music and art activities on site to raise awareness of environmental issues and promote a sustainable lifestyle. In Einstein’s Garden, the three stages are powered by sustainable sources of energy, and the area gives festival-goers the opportunity to engage with innovative low-carbon technologies like solar power and hydrogen fuel cells. Festival Kidz gave it a gold award in 2013.

A small, diverse and family friendly festival which takes place on a quaint country estate in Northamptonshire.

When: August 21-24
Tickets: Adult weekend tickets are £135
Website: www.shambalafestival.org
Sustainability: For the first time in 2014, it is set to be 100% powered by renewable energy sources such as wind, solar and waste biodiesel, and it is the first festival in the UK to send zero waste to landfill. It has pioneered projects like the Bring A Bottle campaign, which encourages festival-goers to bring their own reusable water bottles, in addition to encouraging car travellers to make a contributory donation to the Travel Carbon Fund – in order to offset a portion of their carbon emissions. Julie’s Bicycle acknowledges the importance of Shambala’s sustainability management plans on the industry, saying that it “provides a guiding light in educating, inspiring and motivating the festival sector“. The festival is a founder member of the Green Festival Alliance and the Powerful Thinking initiative. It was named best green festival at the 2013 UK Festival Awards, and has also received accolades from A Greener Festival, Festival Kidz and Industry Green.

An arts, faith and justice festival with traditional Christian roots.

When: August 22-25
Tickets: Adult weekend tickets range from £119-149
Website: www.greenbelt.org.uk
Sustainability: Caterers on site are required to use reusable or biodegradable food packaging, and traders are encouraged to use fair trade products – which includes Greenbelt Festival branded clothing, which is manufactured using fair trade cotton. The festival uses energy efficient bulbs for the venue’s lighting, and it is supported by a range of partners for 2014, including the sustainable bank Triodos and ethical retailer Traidcraft. it was commended by A Greener Festival in 2013.

End Of The Road Festival, Wiltshire

When: August 29-31
Tickets: Adult tickets start at £170; youths at £130 and children at £40.
Website: www.endoftheroadfestival.com
Sustainability: The festival programme is printed on recycled paper using eco-friendly ink, sourced from vegetables, and over half of non-catering traders offer eco-friendly products. The event has partnered with FRANK Water, a Bristol-based charity, since 2010. Its FreeFill initiative provides filtered drinking water at the festival, which then goes on to fund clean water projects in developing countries. It also partners with A Greener Festival to support the Festival Wood campaign through valuable voluntary donations. Festival travellers by car can opt to purchase a tree in order to restore ancient woodland and wild forests in Scotland.

About the certifications and awards

A Greener Festival are a global awards scheme set up in 2007 that recognises festivals that deliver environmental best practice. www.agreenerfestival.com

The Festival Kidz awards were held for the very first time last year to celebrate the most family friendly festivals on the circuit. www.festivalkidz.com

Industry Green, established by Julie’s Bicycle, is a certification of environmental sustainability. www.juliesbicycle.com/industry-green

The Green Festival Alliance (GFA) is an organisation aiming to catalyse sustainability in the festival sector. www.juliesbicycle.com/about-jb/green-festival-alliance

Powerful Thinking is an industry initiative for festivals exploring ideas to reduce costs, respond to climate change and transition to a low-carbon industry. www.powerful-thinking.org.uk

The UK Festival Awards, launched in 2004, are an annual awards ceremony, covering a variety of festival categories including the greener festival award, family festival award, best small festival and many more. www.festivalawards.com

The Festival Wood is a forest regeneration campaign led by A Greener Festival. www.agreenerfestival.com/festival-wood

And finally… renewable energy: something to sing loudly about?