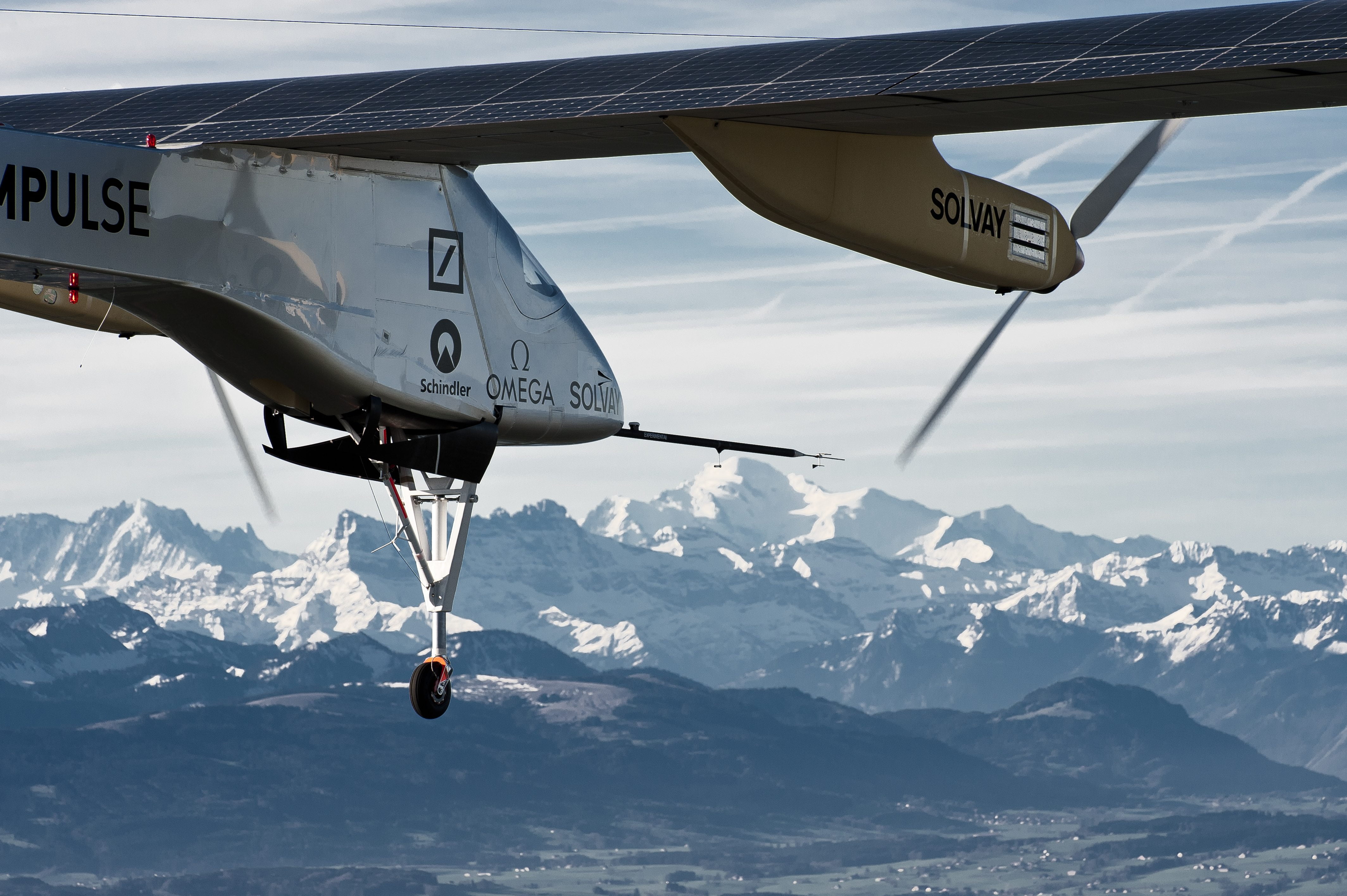 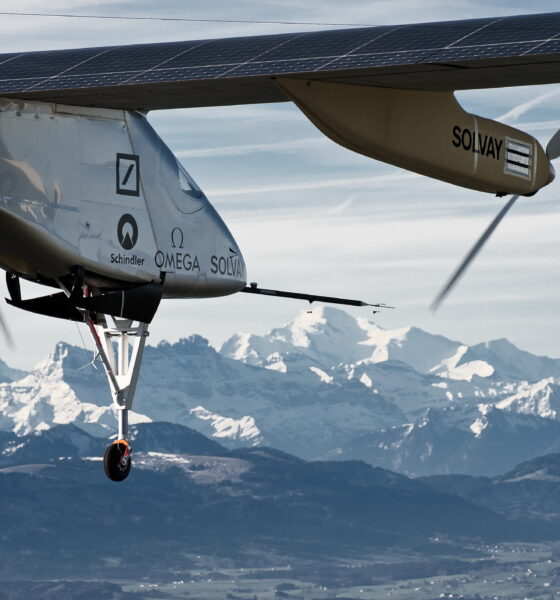 It is safe to say that we have always been pretty bad at predicting how our great-great grandchildren will be getting around, though it never stops us trying.

In Brave New World – written in 1931 and set in 2540 – Aldous Huxley imagined a London where every upper-class resident had a private helicopter. In 1915, the Washington Post asserted that the prices of electric cars would soon drop to be “within reach of the average family”. We can only hope that we never start commuting by jetpack, as the environmental impact doesn’t bear thinking about.

While we must not count on some new technology to save us from our carbon intensive ways, it is possible an inspired breakthrough, a brave innovator or a pioneering application of existing technologies will help us on our way.

That said, not all of these selected projects, inventions and seemingly implausible concepts are intended as blueprints for the future. Some will likely never see the light of day in commercial terms. But each deserves recognition for serving as an inspiration, as admirable demonstrations of the kinds of ingenuity that will be essential in sculpting the sustainable future of transport.

In 1999, Bertrand Piccard – a psychiatrist by trade – together with aeronaut Brian Jones, was part of the first crew to successfully complete a non-stop balloon flight around the globe. They took off with 3.7 tonnes of propane. When they landed, they had only 40kg left. When he realised that their flight could have failed for lack of fuel, Piccard pledged to fly around the world again. But this time, without depending on fossil fuels. With that, Solar Impulse was born.

The first prototype was built in 2010 – a solar powered plane with a wingspan equal to that of an Airbus A340 but the weight of an average car. It soon completed a record-breaking successful 26-hour non-stop flight. The team is now working on a second model, in which Piccard and André Borschberg, co-founder and CEO of Solar Impulse, will attempt to circumnavigate the globe.

The plane gathers all the energy it needs from solar cells. These convert the sun’s rays into electricity to simultaneously power the engines and recharge the plane’s batteries, making it possible to fly throughout the night. Its designers claim that if Solar Impulse technologies were used on a massive scale, the world would be able to save up to 50% of the current consumption of polluting fossil fuel energy. However, they add that this is never going to happen, and stress that it is not the point.

“Our airplane is not designed to carry passengers, but to carry a message”, Piccard explains. His project’s primary purpose is not to revolutionise aviation, but to demonstrate the potential of renewable energy and change the way in which people think about clean technologies. As inspirations go, the sight of a giant, solar powered symbol soaring around the world is a good one.

This guide has focused on trains, planes, boats and automobiles, but billionaire inventor Elon Musk thinks there could be “a fifth mode” of transport (presumably disregarding walking and cycling).

Last year, the entrepreneur behind Tesla, SpaceX and PayPal unveiled the Hyperloop, an almost sci-fi concept that proposes shooting passengers in pods through a network of reduced-pressure tubes at near-supersonic speeds. Though it may sound terrifying, Musk insists the forces on the passenger would be minimal, feeling more like a standard flight on an aeroplane than a ride on a rollercoaster.

Musk suggested the Hyperloop would even provide a safer, faster, and more efficient mode of transport between Los Angeles and San Francisco – the journey he used to illustrate the idea – than the high-speed train currently under development. According to his calculations, the concept would reduce the commute between the two cities to just half an hour, down from the one hour and 10 minutes the journey would currently take by flight.

The concept would be best used connecting cities closer than 1,000 miles apart, as beyond that, Musk notes, supersonic air travel would be preferable. For shorter journeys it would beat the plane, he says, because it would not spend time ascending and descending.

Perhaps most significantly, the pod could be powered entirely by solar panels installed to the top of the tube, though the environmental impact of construction would have to be considered. That said, we should not expect to see the hyperloop gracing reality any time soon. Despite fathering the idea, Musk says he is currently too busy to build it. It is suggested that the project would require $6 billion (£3.9 billion) to complete. However, customers would apparently have to pay only $20 (£13).

Consultancy firm Seymourpowell’s conceptual Aircruise – a giant, vertical airship lifted by hydrogen and powered by solar energy – is essentially a flying hotel. An initial design includes open internal spaces and a stylish bar and 10 apartments. Of course, journeys would be drastically slower than those made by jet – London to New York would take 37 hours – but in such luxury, that would almost certainly be a good thing. 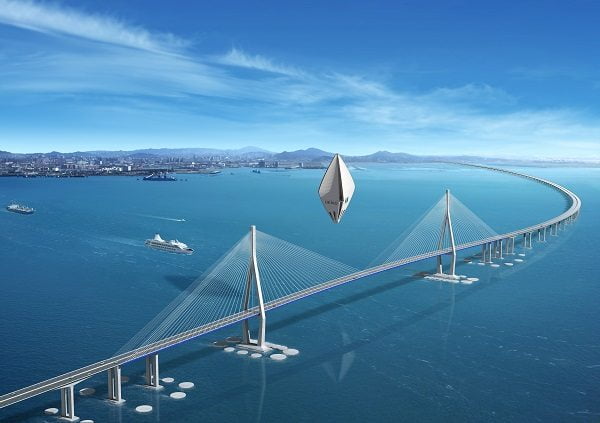 Essentially a flying hotel, Aircruise could travel from London to New York in 37 hours.

“The Aircruise concept questions whether the future of luxury travel should be based around space-constrained, resource hungry, and all too often stressful airline travel”, says Nick Talbot, design director at Seymourpowell. “A more serene transport experience will appeal to people looking for a more reflective journey, where the experience of travel itself is more important than getting from A to B quickly.”

Of the suggestions put forward so far, cycling high over the streets of London is beaten only by the Hyperloop in terms of its ties with science fiction. But SkyCycle, a concept put forward by London-based architects Foster + Partners, landscape practice Exterior Architecture and consultancy firm Space Syntax, proposes a network of elevated bike paths running above the capital’s existing railway lines.

Its designers say that the network would run for over 136 miles, accommodating up to 12,000 cyclists per hour while improving journey times by up to 29 minutes. They claim it could even provide this capacity at a much lower cost than building new roads and tunnels. Though it may seem a little farfetched, the idea has the backing of Network Rail and Transport for London, and could offer a much safer journey to many city commuters.

Drones have become synonymous with conflict and controversial foreign policy, but they do not have to mean death. Matternet is a project that wants to take the most cutting edge technology to the corners of the world where it is needed the most. It will use Unmanned Aerial Vehicles (UAVs) and the power of the internet to establish “the next-generation transportation system”, bringing hope rather than fear.

One model has already been successfully tested in the Dominican Republic and Haiti. Though the smaller crafts can carry a payload of 2kg, covering around 10km in 15 minutes, larger aircraft capable of carrying heavier loads are planned for the future.

The whole concept removes much of the necessity of significant investment in developing ecologically damaging, congested roads. Adapted for use in the cities of the future and for economic transactions, the Matternet team says their idea could revolutionise our transport infrastructure. Similar ideas have recently been proposed by Amazon, the world’s largest online retailer, which is currently testing its own drone delivery systems.

Crucially, Matternet’s UAVs are also remarkably energy efficient. But perhaps most impressive is the cost. To carry a 2kg payload over 10km costs just 24 cents (15p).  The cost of setting up a trial network in Lesotho to transport HIV/Aids tests, complete with 50 landing stations and 150 drones, would be just $900,000. Raptopoulos adds, “We chose to do this not because it is easy, but because it can have an amazing impact.”