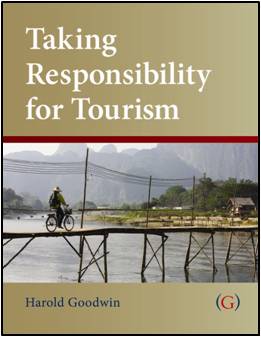 Taking Responsibility for Tourism, Harold Goodwin’s 2011 book, is an engaging and interesting read. In the context of a rapidly growing and increasingly wealthy global population, its messages are important for us all.

Goodwin’s unrivalled grasp of the subject means the book serves as a compelling call to arms for sustainable and responsible tourism. Writing in the foreword, John de Vial of the Association of British Tour Operators (ABTA) speaks of the author in the same breath as Jost Krippendorf – who is widely credited with defining the responsible tourism movement in his book The Holiday Makers (1987).

Goodwin, who is professor of responsible tourism management at Manchester Metropolitan University, opens by speaking about his own early experiences with travel. After taking his first trip abroad in 1979, he noted how he became “uneasy” with the popular ecotourism adage, “Leave only footprints, take only photographs”. He soon became a campaigner and keen advocate for responsible tourism.

The book is split into two sections. The first, Why Responsible Tourism?, begins with some expert scene-setting. Goodwin defines responsible tourism – “taking responsibility and recognising that tourism is what we make of it” – and looks at the industry’s development, as well as debunking a range of popular myths.

He then focuses on the UK market specifically – where he says responsible tourism is “no longer a niche” – and also examines the business case for responsibility.

In the latter part of this first section, he says the emergence of an ethical and socially responsible investor community has required the travel and tourism industry to put more emphasis on corporate social responsibility (CSR) and sustainability. This in turn, he adds, improves shareholder value and reduces risk.

Goodwin devotes one chapter to responsible tourism in destinations – he spearheads the successful conference series of the same name – in which he looks at the purpose of tourism, covering issues like economic development, social inclusion and regeneration.

In the second part of the book, titled Responsible Tourism in Practice, the author uses his extensive knowledge to describe some of the ways the tourism industry is taking responsibility and sustainability seriously – across society, the economy and the environment.