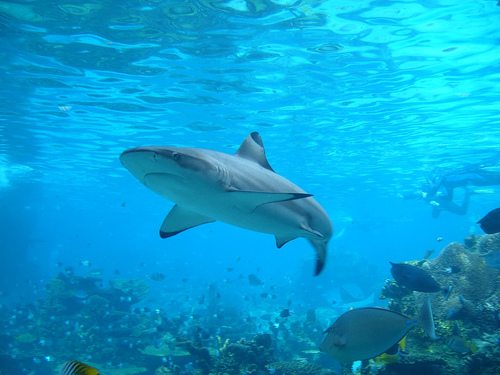 A study has estimated the value of shark ‘eco-tourism’ to be $314m a year (£204m), but the ocean’s greatest predator is under threat by overfishing, particularly for its fins.

According to researchers from the University of British Columbia, sharks are “worth more in the ocean than in a bowl of soup”, with trips that allow people to swim with or near them expected to rake in a cool $780m (£507m) a year in the next two decades.

“It is abundantly clear that leaving sharks in the ocean is worth much more than putting them on the menu.”

The value of global shark fishing is currently $630m (£410m) and has been declining steadily over the past 10 years, primarily because of overfishing.

Sharks are fished in large quantities in Asia, but usually only for their fins. Shark fin soup is a popular dish in China and thanks to the rising wealth of the Chinese middle class, the demand for this product has increased and spread to other parts of the world.

Scientists have estimated that almost 100m sharks are killed every year, leading some of the more vulnerable species to the brink of extinction.

However, swimming with sharks and observing them in their habitat has become an increasingly popular activity for tourism, as the British Columbia study shows.

In the Caribbean and Oceania, many countries have created protected sanctuaries that are exempt from fishing, where tourists can enjoy the sight of these predators, which are essential to the marine ecosystem, in their natural environment.