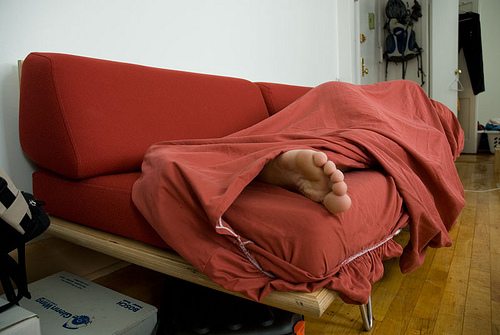 What better way to experience new places and cultures, and save vital resources, than to stay on someone’s sofa for the night?

I’m a bit new to this couchsurfing lark. With over 7 million members in 100,000 cities, Couchsurfing.org, founded in 2004 as a non-profit organisation although since filed as a company, has become a global phenomenon.

A platform for people with a spare place for travellers to rest their weary heads (hosts) to advertise, and said travellers seeking a bed for a night and a guide to their destination (the guests) to find them, it allows people to connect in new places. Couchsurfing hosts are everywhere, from the Sahara to Sydney.

But then am I such a novice as I think? I’ve slept on sofas before. I’ve arranged to stay with friends of friends in the past. I’ve met with local people to show me around. Although Couchsurfing.org has made the concept a more established travel option, albeit with some sceptics, and has opened up the possibility of visits to and accommodation within regions where the six degrees of separation may not have allowed for previously, it is essentially just staying with a person in their home.

So is this the most environmentally friendly, locally focused, sustainable way to travel?

On meeting my first ‘official’ couchsurfing host, I confessed that I was a virgin to this experience, and I didn’t really know what to do. “You just have to be my friend for the weekend”, he said.

This is what makes couchsurfing not just freeloading, but a form of cultural exchange. Hosts could just get a lodger if they have space; a paying one. For them, the allure of opening up their home to, let’s face it, a stranger with a big bag who is about to disappear off into the unknown, is that of meeting new people from different places.

For guests, it should be the same. Welcomed into a home, you become part of the household, and live like your host. You’re not tethered to them, but why sleep (metaphorically) with a stranger, for however brief a period, without getting to know them in some way? From breakfast to bars, this is the ultimate in living like a local.

Having someone to show around your home and its surroundings is often a thrilling and liberating experience for the host. For all the talk of staycations, few people really explore and relearn the location in which they live. Routines are established, favourite haunts founded and a settled way of life begins.

Who visits the tourist information in their hometown? Seeing the place you have lived for a few years with the eyes of a newcomer and watching them get excited can revive the passion for your own home. Hosts often fall in love with their hometowns through the process of aiming to make a visitor do the same, and at the same time provide a much needed tourism boost to local museums, attractions and businesses in an economic climate that is not always hospitable to smaller players.

As well as an insight into local life and the opportunity to meet new people, it is a greener form of accommodation than hotels or hostels. It is not at all a free experience, as an extra person in the home will involve an increased use of water, electricity and other resources, but the increase will be negligible compared to that of a hotel.

One of the reasons for this is that there is a certain level of respect that comes from staying with a ‘real’ person to whom you have spoken to, as opposed to a faceless corporation where you are just another paying number. Without the option of using four towels where one will do; the urge to undo every bottle of complimentary bath goodies even if you are not sure what it does; or the guilt that comes from running a full bath and lazing the night away, comes a reduced use of resources.

There’s also a part of me that sees this as sustainable, as I view the couchsurfing phenomenon with slightly rosy glasses and the desire to believe in karma or the notion of ‘paying it forward’. It’s a nice thing to do – open up your home and welcome a visitor.

Everyone from Jesus to Kant has spoken on the importance of treating everyone with respect and as a friend or family, with the latter believing that it is the “right of a stranger not to be treated as an enemy when in the land of another”.

We are all part of the same world, and although few would go so far to consider someone we have never met our brother or sister, a la Jesus, there’s an increased recognition and acceptance of the term ‘global citizen’.

To really travel locally and make it more than just a buzzword, we have to engage with locals, get excited about the every day, saving resources as we do so – and what better way than at a home?

When on a responsible holiday, do as the locals do