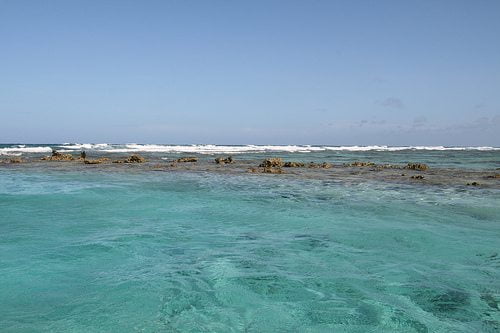 It is situated on the east coast of Central America, with the Caribbean Sea to the east, the Mexican border to the north and Guatemala to the west and south.

In northern and central Belize, tourists can explore ancient Mayan civilisation ruins and archaeological sites, as well as the business metropolis and cultural hub of its largest city, Belize City. This gives a flavour of the wild, where people can search the dense jungles endlessly, as well as the rainforests, rushing waterfalls and lagoons. Meanwhile, the southern and south-eastern coast of Belize offer the perfect combination of culture, undiscovered landscapes and golden gleaming beaches.

Belize has a fascinating mix of national parks, nature and forest reserves and wildlife sanctuaries. Prime examples include the Five Blues Lake national park and St Herman’s Blue Hole national park, both located in the Cayo district near to the capital city Belmopan.

In the Five Blues Lake, located in the eponymous national park, interchangeable water depths and light cause it to reflect different shades of blue; the lake is surrounded by luscious scenery like karst hills, tropical forests and caves.

St Herman’s Blue Hole national park’s main attractions are its extensive limestone cave systems (St Herman’s and Crystal caves) and nature trails. Visitors can take a guided tour of St Herman’s Cave, and experience a tranquil and refreshing swim in the Blue Hole – a pool that is fed by an underground stream from St Herman’s Cave.

The Crystal Cave, known otherwise as Mountain Cow Cave, contains Mayan relics, impressive caverns and crystal formations. These can be explored with experienced tour guides through the arts of cave tubing, spelunking and cave rappelling. Other adventurous pursuits can also be undertaken across Belize like kayaking, sailing and diving.

Hiking trails and tours and even camping trips bring about encounters with tropical forests, plants and wildlife including howler monkeys. There are over 600 recorded species of bird found across Belize, and this suggests the national parks make them a great place for spotting rare bird species, for example white hawks, orange-breasted falcons and keel-billed toucans.

As far as natural coral reef wonders go, it has a listed UNESCO world heritage site, the Belize Barrier Reef Reserve System, which is the largest barrier reef in the northern hemisphere. The coral reef ecosystem is a habitat for distinctive, precious and severely threatened species such as the green turtle and the West Indian manatee.

One of the reef’s systems most prominent features is the Great Blue Hole – an underwater sinkhole extremely popular for scuba diving. This also ranked number one in 2012 on the Discovery Channel’s 10 Most Amazing Places on Earth.

In the Caribbean, studies on marine ecosystems and the extent of coral reef loss in Belize have shown that this process of decline is being fuelled by human activity, overfishing, pollution and climate change. Although over recent years, the health and state of the coral reef has showed signs of recovery.

With its impressive landscape of mountains, conservation zones, ancient wonders and diverse wildlife, sustainability management plans and community-based initiatives are vital for progressing Belize as a holiday destination, in counteracting the extinction of corals and protecting rare species.