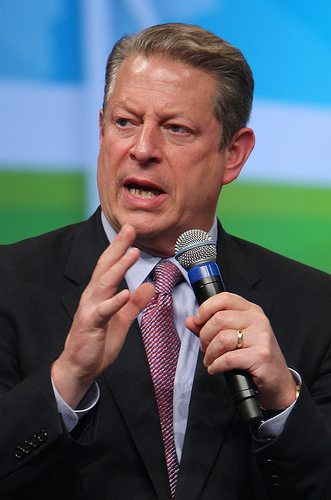 Business, NGO and political leaders join forces to back a low carbon future

Former US Vice President Al Gore and CBI Director-General urge UK not to miss economic benefits of a low carbon world following the Paris Climate Summit. With high expectation of major progress on climate change at the UN’s Paris climate summit in December, business, civil society and political leaders have joined forces today to back a low carbon future.

Former US Vice President Al Gore and the Director-General of the CBI, John Cridland, are calling on the government to put the UK in a stronger position to ensure it doesn’t fall behind in a low carbon world.

They are both speaking today at a major climate leadership event  in central London hosted by Green Alliance, in association with the CBI. Speakers are expected to raise expectations of the need to accelerate technological change and political action to create further momentum towards a low carbon economy.

Former Vice President Gore will discuss the impacts of the climate crisis and the benefits of transitioning to a low carbon economy. He will also encourage the UK to continue its past international leadership on climate action, and show the world how a major economy can prosper without coal, the dirtiest fossil fuel.

John Cridland will argue that certainty and clarity of direction from the international community is critical to developing long term business investment in a low carbon future. He will also highlight the need to keep up momentum on reaching a global solution by building on the UK’s hard won credibility as a climate leader.

John Cridland, CBI Director-General, said: “Business must be – and wants to be – part of the solution to tackling the global challenge of climate change.

“The green economy is an emerging market in its own right, brimming with opportunity, and the UK has built up real credibility on climate leadership and low carbon investment. Yet, with the roll-back of renewables policies and the mixed messages on energy efficiency, the government risks sending a worrying signal to businesses.

“We need all countries to pull in the same direction at the Paris Summit to give firms the certainty and confidence they need to invest in the green economy for the long run. Politicians and negotiators should be confident that business is behind them in securing a lasting climate deal.”

Al Gore, Former Vice President of the United States of America, said: “The United Kingdom’s historic legacy of leadership on the most important moral issues faced by humanity, including the climate crisis, is long and has been recognised with respect by the community of nations. It is time for the UK government to honour and live up to that legacy, and return to its global leadership position, domestically and abroad, by supporting an ambitious international agreement in Paris that unleashes the power of the private sector to create a global clean energy economy.”

Loretta Minghella, Chief Executive, Christian Aid, said: “The poorest people in the world don’t have an insurance company to turn to when their crops wither or their homes are washed away. Instead they have to hope leaders of developed nations fulfil their moral responsibility to follow through and take action on climate change. We ask the UK government to continue to play a leadership role by pledging predictable and growing climate finance for developing countries and by setting out a clear timetable for the domestic phase out of coal.”

Matthew Spencer, Director, Green Alliance, said: “A good deal at Paris will create new low carbon markets around the world. If the UK can  re-stabilise its own energy policy, it stands to gain from the hard work and investment of the past two decades. We’re ahead of the world in bringing down the cost of offshore wind, phasing out the use of coal and, as today’s event shows, we have an enviable level of agreement between business and NGOs about the need to maintain the UK’s low carbon momentum. To build on these advantages, the government needs to clear up the confusion about what it is trying to achieve for the UK energy system, ahead of the Paris conference. ”