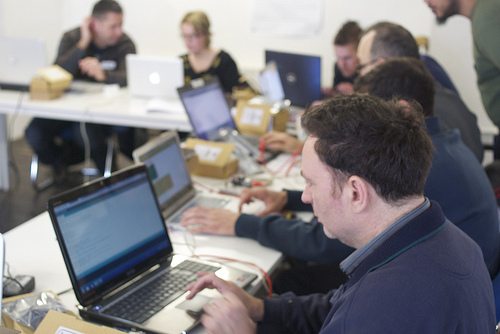 The UK government has announced that it will invest an extra £45m into the development of the so-called Internet of Things.

Speaking at a technology trade fair in Hannover, Germany, prime minister David Cameron said that by researching such technology, the host nation and the UK could lead a new “industrial revolution“.

The Internet of Things refers to networks of physical objects – from kettles to pacemakers – equipped with sensors for data gathering, data monitoring, decision-making and process optimisation.

Experts say such technology could change everyday life, and could prove particularly useful in the pursuit of sustainability.

Examples of potential applications include smart energy meters that help homeowners be more efficient, or sensors in sewers that can warn nearby communities when floods are imminent.

Other ideas range from sensors that will tell you if you’re overwatering your plants, to traffic lights that detect when the traffic is approaching from only one direction, and change to green before the cars have to slow down and use more fuel.

According to a report by AT&T and the Carbon War Room, the Internet of Things could help reduce global greenhouse gas emissions by 9.1 billion metric tons by 2020.

“Take British ingenuity in software, services and design, add German excellence in engineering and industrial manufacturing and together we can lead in this new revolution.”

The new investment will take the total being made available to £73m. Government chief scientific adviser Sir Mark Walport will now lead a review into the potential of the technology.