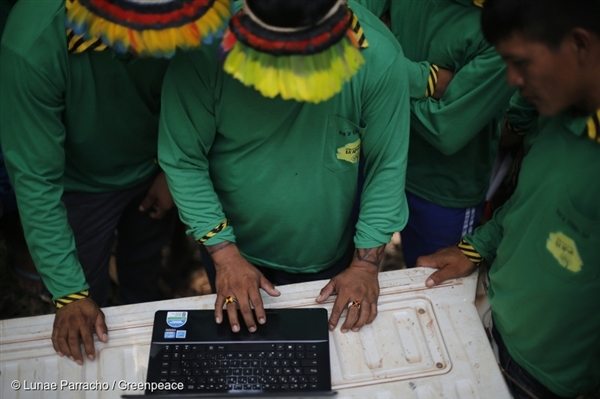 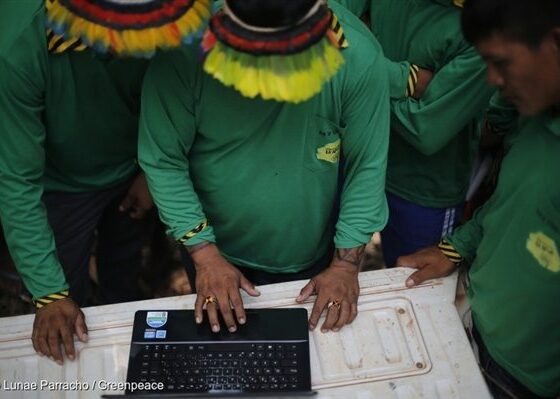 Answering a call from the Ka’apor people, activists from Greenpeace Brazil are working with the Ka’apor indigenous community to monitor and protect their lands from the invasion of illegal loggers in Maranhão state, Brazil.

Activists returned from a week in the forest with the Ka’apor people, building more accurate maps and installing motion and temperature sensored cameras to document the invasion of logging trucks inside their territory. The Ka’apor will also use electronic tracking devices to monitor the logging trucks as they travel in and around the Alto Turiaçu Indigenous Land.

“We are taking action because the forest is our home. It’s in the forest that lies our life. Without the forest, we are not the Ka’apor. ‘Ka’apor’ means ‘forest dwellers’ and this is why we must defend it”, said a leader from the Ka’apor community who asked not to be identified for security reasons.

The Alto Turiaçu Indigenous Land is one of the last remaining tracts of Amazon rainforest in the state of Maranhão, and it is increasingly vulnerable to invasions of loggers and hunters. By 2014, eight percent (nearly 41,000 hectares) of forest inside the indigenous land were cleared. According to official data, between 2007 and 2013, 5,733 hectares of forest were degraded by illegal logging within the Alto Turiaçu Land.

Loggers clear new roads and trespass on indigenous land in search of valuable species of timber such as Ipê, which is processed and exported to US and EU markets – fetching values of up to 1,300 euros per cubic metre. Since 2008, the Ka’apor have publicly called for an end to the invasions of loggers, an illegal practice often followed by violence and death.

According to the Indigenous Missionary Council (CIMI), four Ka’apor were killed and fifteen leaders suffered attacks over the last four years. On April 26, 2015, Eusébio Ka’apor, one of the most active leaders in the fight against deforestation, was shot dead returning from a visit with his son. Despite evidence of a link between the murderers and the loggers, the crime still has not been properly investigated by local authorities.

In early 2014, the Federal Justice ordered all authorities to submit a surveillance plan for the Ka’apor indigenous land and the installation of fixed security checkpoints within the area. So far, nothing has been done.

“These technologies will help improve the autonomous surveillance activities developed by the Ka’apor people to protect their lands. It will also provide additional evidence that the authorities must act to put a stop to the violence brought by illegal logging in the region”, says Marina Lacorte, Amazon campaigner at Greenpeace Brazil. “If the Ka’apor people are protecting their territory with their own resources and little technological support, why is the Brazilian government not able to do the same?” she questions.

In 2014, Greenpeace Brazil published a two-year investigation exposing widespread illegalities and manipulation of the Brazilian controlled system to launder illegal timber with legal paperwork, contributing to forest degradation and deforestation. The investigation outlined how the Brazilian timber sector is plagued by corruption, how Amazon forest criminals are aided by falsified documents and how laundered timber makes its way to global markets, despite laws in Europe and the US to combat trade of illegal timber.

Greenpeace is demanding that international market operators look beyond official documents to ensure that Amazon timber smuggled from indigenous lands is excluded from their supply chains. Greenpeace is calling on the Brazilian government to review all approved forest management plans since 2006 in the Amazon as a first step to end illegal and predatory logging in the Amazon. The Brazilian government must also ensure full and effective protection for all indigenous lands in the country