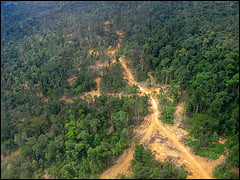 Despite drawing global plaudits for its forest conservation work, particularly in Indonesia, it is alleged that Norway’s state pension fund undermines its progress by investing in unethical industries. Alex Blackburne has the details.

The country of Indonesia is in the Guinness Book of World Records, but not for a positive achievement.

Despite drawing global plaudits for its forest conservation work, particularly in Indonesia, it is alleged that Norway’s state pension fund undermines its progress by investing in unethical industries. Alex Blackburne has the details.

The country of Indonesia is in the Guinness Book of World Records, but not for a positive achievement.

The entry reads, “Of the 44 countries which collectively account for 90% of the world’s forests, the country which pursues the highest annual rate of deforestation is Indonesia with 1.8 million hectares of forest destroyed each year between 2000 and 2005”.

But for the Southeast Asian set of islands, there came a saviour. A saviour in the form of a Scandinavian country with a vow to do good: Norway.

In 2010 alone, the country provided £19m worth of investment into forest conservation in Indonesia through the United Nations’ Reducing Emissions from Deforestation and Degradation (REDD) scheme.

But the Norwegians’ seemingly good deed towards the preservation of the precious Indonesian forests came undone recently, with the revelation that the country’s state pension fund invests in some of the industries that contribute to the world’s deforestation.

The accusations were written in a joint letter by the UK-based Environmental Investigation Agency (EIA) and the Rainforest Foundation Norway.

The letter, addressed to Norwegian Prime Minister, Jens Stoltenberg, explains how the Norwegian Government Pension Fund Global (GPFG) “has invested significant and growing capital in the very sectors responsible for the great majority of the world’s deforestation, and, controversially, in many of the very logging, plantations, and mining companies currently devastating forests in the countries the NICFI (Norway’s International Climate and Forest Initiative) is supporting with REDD+ funding”.

It’s also not the first time that Norway has been accused of hypocrisy within environmental circles. Last year, REDD-Monitor, a media outlet dedicated to providing news about REDD’s work, wrote about a similar role undertaken by the Norwegians in the funding of the Amazon preservation in Brazil.

What is true is the fact that Norway has not denied these claims. Whilst on the face of it, it does seem hypocritical; the country is still making an effort to do good – more than can be said for others.

The way forward for the Norwegians is to drastically cut down its state pension investment in these unethical industries. Then, and only then, will the world fully appreciate its environment-saving efforts.

If you would like to find out more about investing in companies or funds that don’t go near unethical companies, ask your financial adviser, if you have one, or complete our online form and we’ll connect you to a specialist ethical adviser.