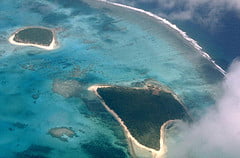 Many of the small island Pacific nations have ambitious renewable energy targets, but their efforts will all be in vain if progress is absent where it really counts. Alex Blackburne looks at a group of countries desperately hoping for change.

It’s a David versus Goliath scenario in which David doesn’t even own a slingshot. David, or the 22 Pacific Islands, is being continually pummelled by several Goliaths in the shape of China, the US, and the rest of the top ten polluting nations who are perhaps unaware of their opponent’s existence.

Many of the small island Pacific nations have ambitious renewable energy targets, but their efforts will all be in vain if progress is absent where it really counts. Alex Blackburne looks at a group of countries desperately hoping for change.

It’s a David versus Goliath scenario in which David doesn’t even own a slingshot. David, or the 22 Pacific Islands, is being continually pummelled by several Goliaths in the shape of China, the US, and the rest of the top ten polluting nations who are perhaps unaware of their opponent’s existence.

Despite the best efforts of the Pacific Island Countries (PICs), climate change is becoming an increasingly real threat for the region. And it is a threat that they have very little control over.

The whole nation of Kiribati is seriously considering uprooting and relocating to Fiji for salvation, all because of the dangers of rising sea levels.

In an effort to influence the rest of the world, many PICs have set themselves ambitious but entirely realistic renewable energy targets.

As it stands, the PICs have a high dependence on fossil fuels. But they are so insignificantly small when compared to the rest of the world, that their combined carbon emissions only account for around 0.03% of the world’s total.

You only have to compare PICs emissions to China—the world’s most polluting (and admittedly most populous) country with a 25% contribution to this total—to get a real sense of scale.

Still, the Pacific Islands Greenhouse Gas Abatement through Renewable Energy Project (snappily shortened to PIGGAREP) endeavours to make change. It claims that even with a business-as-usual approach, the 11 nations taking part can collectively reduce greenhouse gas emissions by 33% by 2015.

With investments pumped into renewable technologies, the targets are even more impressive. Tuvalu and Niue both have 100% renewable targets set for the not-too-distant future. The Cook Islands, Fiji, Kiribati, Marshall Islands, Nauru, Samoa, Tonga and Vanuatu also have similarly ambitious aims, according to the Secretariat of the Pacific Regional Environment Programme.

Most of these extremely positive targets are sadly somewhat irrelevant, really only serving as a cry for help. Niue, for example, emits less carbon than any other country on the planet—just 4,000 tonnes yearly (China emits 30 million tonnes).

In its drive towards being 100% renewably powered, a blog called Niue Press, which is devoted to everything related to the island, lists all the places where solar panels are found in the country – the high school, the power station office, and the hospital. That’s it.

The country has 1,398 inhabitants (as of July 2009), two television stations, one newspaper, one nine-hole golf course, and a currently-under-construction lawn bowling green.

The sad irony behind the PICs’ heart-warming, globe-cooling efforts is that whilst they’re the ones that will very soon be most severely affected, they’re also the ones that can do the least about it.

Back in November, we wrote an article about how research by global risks advisory firm, Maplecroft, had deemed the developing world at “extreme risk” of climate change. It’s a familiar story.

Conversely, the biggest contributors to world carbon levels—by rank, China, the US, India, Russia, Japan, Germany, Canada, South Korea, Iran and the UK—will not witness such a severe effects when climate change really digs its heels in, but are the nations with the most power and influence. 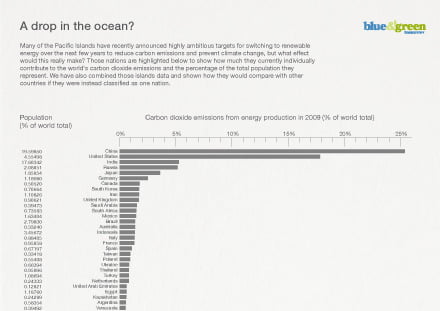 China’s contribution to carbon emissions is staggering—25.36% to be exact—but then again, it does also account for nearly 20% of the Earth’s population.

The real demon then, is instead our cousin across the Atlantic. Sitting comfortably in second place of the carbon emissions table, with a total input of nearly 18%. However, unlike China, the US can’t be allowed off the hook because of a massive population. With just over 4.5% of people living in the country, its carbon emission levels are shockingly high.

And the UK isn’t exactly sitting pretty. It’s tenth in the carbon emissions table, and boasts just over 0.9% of the world population.

In stark contrast, the Pacific Islands are way, way down on both carbon emission and population. Even when added together the ones on the list only contribute 0.05% of the world’s greenhouse gases, placing the PICs between Lebanon and Bolivia. 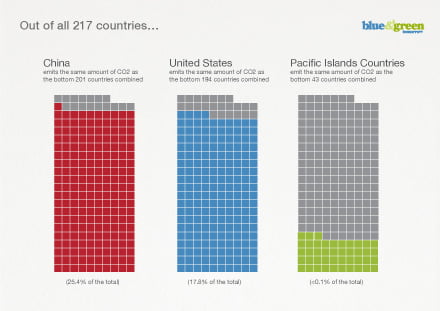 In reality, the majority of world’s countries release carbon at a relatively insignificant level. Therefore, put simply, it’s down to the top emitters to make the real difference. But sadly, we’re not currently doing enough.

The US, China to an extent and, yes, the UK and the rest of the top 10 polluters are all responsible for the near-term climate change problems that have led Kiribati to consider relocating to Fiji. But this is not a solution for the longer term—we can’t all move to Fiji.

At the end of last year, Japan announced that it was contributing $15m to support the clean energy drive in some of the world’s smallest nations that face an immediate threat from climate change.

While sustainable investment is always welcome, because of the aforementioned issues of scale, it really only serves to send out a signal to the rest of the world and raise the profile and immediacy of the threat.

Finding solutions to meet this very global challenge is what makes sustainable investment so important. Adopting a “not my problem, why should I care?” attitude can no longer be tolerated. We, the nations with the true power and influence to make a difference, must act now.

And you can be part of that revolution. Ask your financial adviser how you can invest money into funds and companies that don’t contribute to the PICs’ increasingly doomed existence or, even better, how you can let your money do sustainable work for you. If you can’t find an answer to your questions or if you don’t have an IFA, fill in our online form and we’ll connect you to a specialist.

What’s more, you can switch to 100% renewable energy at home and start reducing your carbon footprint immediately. Visit Good Energy to find out more.