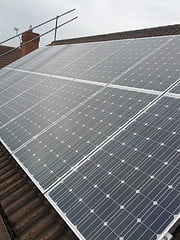 The hunt for pioneering energy storage

Alex Blackburne looks into the difficulties surrounding renewable energy storage, and how some new research, conducted at an American university, might have the answer to the problem.

Clean, renewable energy is one of the main, most important necessities if we’re going to tackle climate change by reducing carbon emissions. That’s almost universally agreed.

Alex Blackburne looks into the difficulties surrounding renewable energy storage, and how some new research, conducted at an American university, might have the answer to the problem.

Clean, renewable energy is one of the main, most important necessities if we’re going to tackle climate change by reducing carbon emissions. That’s almost universally agreed.

But what happens when the wind isn’t blowing or the sun isn’t shining?

Whilst we know that the wind will never cease forever, some days, even in Britain, will be gust-free. This then poses the wind sector something of a challenge as to how to generate power when this happens.

Similarly, and perhaps more relevantly when it comes to Britain, the sun isn’t always out – especially at night – so it wouldn’t be ideal to solely rely on solar power.

This has long been the renewable sector’s downfall and its enemies stick. Obvious comparisons are going to be drawn against the fossil fuel sector. For those that aren’t completely converted to renewable energy, the fact that non-renewable energy sources can potentially generate power for 24 hours a day, seven days a week, 365 days a year, sadly wins it on most occasions.

The nature of renewable and non-renewable energies on a level playing field in terms of cost is called ‘grid parity’. When this is achieved is often down to clever guesswork, with a recent study predicting 2018 as when we’ll see price equality in the energy sector.

Whilst the cost of energy, both in renewable and non-renewable form, isn’t universal, the fact that that it’s difficult to store renewables most certainly is.

Those days could be over, though, after researchers at Stanford University claimed to have developed “a high-power battery electrode that is so inexpensive to make, so efficient and so durable that it could be used to build batteries big enough for economical large-scale energy storage on the electrical grid“.

If they’re not overselling their achievements, then the Stanford researchers may well have unearthed the Holy Grail of the renewable energy sector.

“At a rate of several cycles per day, this electrode would have a good 30 years of useful life on the electrical grid”, said Colin Wessells, the lead author of a paper describing the research, whilst Yi Cui, co-author of the paper, described the development as a “breakthrough performance”.

According to New Energy and Fuel, though, the Stanford team are only part-way there to achieving practical renewable energy storage, meaning the Holy Grail is still somewhat buried.

“Every battery needs two electrodes”, it writes, “a high voltage cathode and a low voltage anode — in order to create the voltage difference that produces the electricity to flow.

“The researchers need to find another material to use for the anode before they can build an actual battery.”

It will take some time before we truly have symmetry between renewable and non-renewable energy in terms of cost and storage. Renewables, though, remain the smart and environmentally-friendly choice.

That is why investment in ethical funds is so important – because you’d be helping the industry to develop, often with lucrative financial rewards.

If you would like more information about investing ethically, ask your financial adviser, if you have one, or complete our online form and we’ll connect you with a specialist ethical adviser. If you are interested in converting to renewable energy in your home, then head to Good Energy.