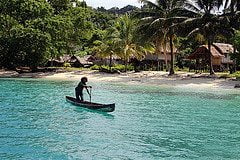 A town in Solomon Islands relocating its whole population proved to be the top article in August. Animal testing, integrated sustainability in business and tidal energy also came out top.

Tom Revell: A town in the Soloman Islands is preparing to relocate its whole population to escape from rising sea levels caused by climate change. Read more.

Jemma Collins: Campaigners have expressed their dismay as new data has revealed a dramatic increase in experiments involving certain animals in Scotland in 2013. Figures show an increase of testing on animals including dogs, cats, horses and primates since 2012.Read more.

Integrated sustainability key to business resilience, according to new report

Richard Heasman: The Co-operative Bank has announced a loss of 38,000 current account customers amidst a “hurricane of negative publicity” following its near collapse, but has, however, recorded a financial strengthening in its first half. Read more.

Charlotte Malone:  Ahead of its installation in Welsh waters, a tidal energy device developed in Cardiff was unveiled on Thursday. The device will help Wales produce clean and predictable energy in order to meet its low-carbon energy generation goals. Read more.