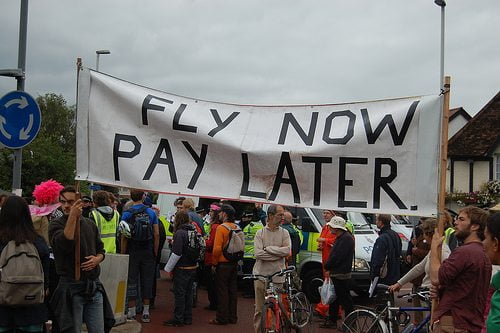 The Committee on Climate Change (CCC) has warned that proposals for additional runways at UK airports will need to comply with legally-binding climate commitments.

The government’s climate watchdog will review next summer the environmental impact of the airport comission’s interim report, which was published last week.

The report, chaired by Sir Howard Davies, examined the case for new runaways at Heathrow and Gatwick airports, to be built by 2030, as well as other possibilities by 2050.

However, environmental and citizens group opposing the expansion have criticised the proposals, also on climate grounds, saying that this would threaten the UK’s  2050 carbon emissions reduction target of 80%.

Green groups fear that the expansion will increase carbon dioxide (CO2) emissions – for which the aviation industry is responsible for a large portion.

The CCC said that airport expansion might mean a rise in the price of long-haul flights, up to £200, in order to stick to climate goals.

The committee’s chief, David Kennedy, told the Guardian, “We said back in 2009 that it would be possible for the government to plan for 60% demand growth, and stay inside the climate change commitments. That is the scope for demand to increase.

“The expansion of Heathrow by one runway would stay within the 60% limit, depending on the extent of demand growth at other locations.

“The Davies commission has said if capacity is unconstrained and demand rose for example by 200%, it would be necessary for the carbon price, and cost of flights, to rise by the figures in the report to keep the increase in demand to 60%.”

However, Kennedy added that climate commitment is only one of the issues that emerged from the expansion proposal.

He said, “If the climate change targets are being met, then the remaining issues become cost, and local impacts relating to the economy, air quality, noise and traffic congestion, but these are issues for which the climate change committee does not have responsibility.”