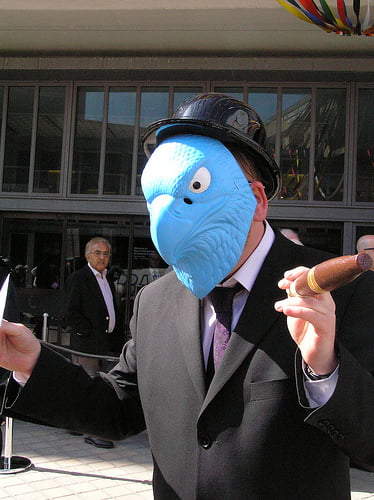 Barclays chairman Marcus Agius witnessed a revolt by shareholders at the annual general meeting yesterday, despite offering apologies for miscommunication on the issue of executive pay.

A significant 26.9% of shareholders said “no” to Barclays’ executive pay package and a further 21% voted against the re-election of Alison Carnwath the renumeration committee chairman.

Investors, it seems, are no longer willing to sit back and watch executives generously pat themselves on the back amidst financial chaos. They join a growing majority of the general public that has long expressed anger over excessive pay packages.

It was only back in February that Her Majesty’s Revenues & Customs (HMRC) took umbrage at Barclays’ half billion pound “aggressive” tax avoidance tactics, which adds to the distinct feeling that some of Britain’s big banks aren’t taking their role as corporate citizens very seriously.

But while public outrage and a slapped wrist from HMRC is one thing, failing to curry favour with shareholders is quite another.

At the AGM, chairman Marcus Agius said, “There is a significant minority of shareholders who feel that we got some of these [remuneration] judgements wrong for 2011 and that we have not sufficiently taken their views on board.

“For this I apologise and I assure you that in the future we will be engaging differently and more purposefully with shareholders in order to ensure that we obtain a broader level of support on remuneration policy and practice.”

Sarah Wilson, a shareholder advisor told the BBC: “The average level of dissent on these issues is about 10% […] So I think in terms of shareholders getting their point across, this is going to go down in the books as one of the most serious rebellions that we’ve seen for a long time”.

And it’s a growing trend. On April 18, The Financial Times reported that some 55% Citigroup’s shareholders would not support a pay plan promising tens of millions of dollars for Chief Executive Vikram Pandit and his directors.

Sarah Wilson also commented at that time: “Shareholders have been giving banks some time to find their way and do the right thing on pay, but I think patience is running out.”

Roger Barker, the head of corporate governance at the Institute of Directors (IoD), spoke on the BBC’s Today programme: “Executive pay over the last decade has just got out of kilter with performance. It’s now at the wrong level, it’s become very opaque, very complex and we really I think need to get it on a much more sustainable level”.

And sustainable is the word. On April 13, Blue & Green Tomorrow covered a new report from the Global Alliance for Banking on Values (GABV)—a coalition comprising 15 of the world’s most sustainable banks. The report noted that adopting good morals and ethics is financially beneficial, with sustainable banks outperforming their mainstream counterparts.

March was Move Your Money month in the UK and though we are now fast approaching May, the idea of encouraging people to move their money away from large, often unsustainable, high street banks is as strong today as ever. B&GT gave a rundown of the top five ethical banks based on data from yourethicalmoney.org to help you vote with your feet.

Sustainable banking and investing is essential if we are to meet many of the global challenges facing us today. Our new Guide to Sustainable Investment offers a refreshing insight into the space. If you haven’t already read, you can download it for free here.

Fill in our online form and we’ll put you in touch with a independent specialist adviser.